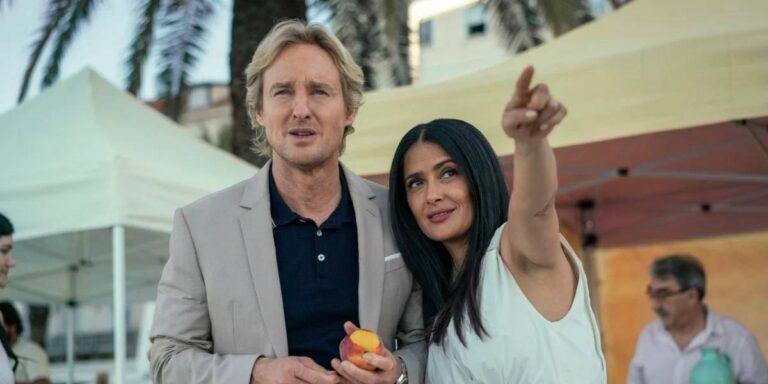 Greg (Owen Wilson) works a bland job at a generic technical support company — aptly named “Technical Difficulties” — where he spends most of his days locked in his office, sketching a picturesque waterfront home and a beautiful, mysterious woman. Needless to say, this doesn’t make Greg the most productive employee, so it’s of little surprise when his boss (Steve Zissis) calls Greg into the office to tell him that he’s been fired.

Greg winds up in the bar across the street, where a wild-eyed woman named Isabel (Salma Hayek) beckons him over to a booth, promising to take care of his problems and ranting about “special yellow crystals” and whether or not the patrons in the bar are “real.” This should be enough to send any sane person running for the door, but Greg is strangely intrigued, especially when Isabel showcases a talent for manipulating the space around them with a wave of her hand. According to Isabel, everything around them — the people, the places, the events — are all part of an elaborate simulation, and if Greg ingests the yellow crystals, he’ll be granted similar powers.

Then she drops an even bigger surprise: that woman Greg is always sketching? It’s Isabel, and the location he sees in his dreams is their real home, outside of the simulation. “You’re my guy,” she tells him, and soon they’re eating crystals like candy and having sex in public restrooms. When an elderly woman at a rollerskating rink casts a dirty look in Isabel’s direction, she growls “you judgmental bitch” and urges Greg to knock her over. Soon they’re both waving their arms and sending patrons flying, showcasing no remorse for inflicting pain because “nothing is real.” For the first half of Bliss, the premise seems to be “what if Neo from The Matrix wasn’t a freedom fighter, but just a selfish asshole?”

Often angry and mean-spirited, Isabel grows increasingly dependent on the yellow crystals, and paranoid about Greg’s devotion to her. When she learns he’s been trying to contact his daughter, Emily (Nesta Cooper), she demands they exit the simulation (which basically requires overdosing on crystals of a different sort). As it turns out, Isabel was telling the truth: the scenic utopia from Greg’s sketchbook is a real place, and she and Greg (both scientists) have been plugged into the absurdly named “Brain Box,” a simulation designed by Isabel to put people through hellish experiences in order to give them a new appreciation for their perfect lives.

There are a lot of big ideas at play in writer-director Mike Cahill’s latest effort, but almost none of them are explored to any degree of satisfaction, and the film posits numerous questions for which it seems to have no answers. For example, why can’t Greg remember anything about his life outside of the Brain Box? If he and Isabel are soulmates (her words, not mine), why isn’t she more concerned about his well-being? If Greg’s daughter is truly an “FGP (Fake Generated Person)” that exists only within the simulation, why does Bliss keep cutting away from Greg and Isabel’s “real” life to show Emily’s increasingly frantic search for her father?

Neither of the two leads are particularly effective in their roles, with Hayek’s exaggerated, over-the-top performance being especially grating. Wilson shares some nice moments with Cooper — the only emotional connection in Bliss that feels genuine and authentic — but otherwise spends most of the film in a state of bewilderment. Character motivations are all over the place: in one scene, Greg refuses to remain in the simulation any longer because he longs for the tranquility of the futuristic paradise outside. Literally minutes later, he’s refusing to leave the Brain Box-generated world because he finds it beautiful and exciting.

The whole thing is a colossal mess. In short, Bliss turns out to be anything but.