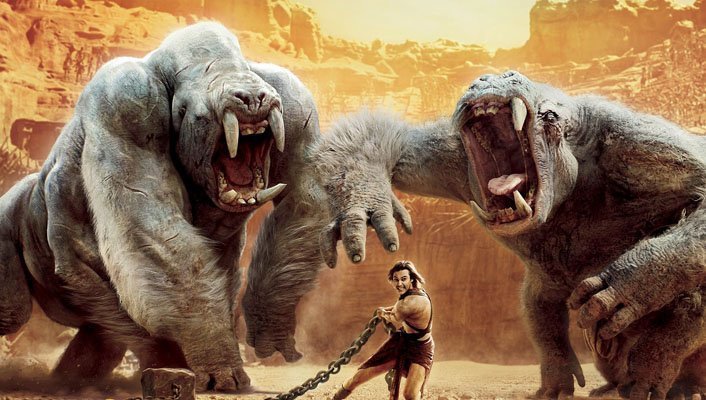 John Carter is hampered by a messy script and a headlining cast that lacks both the charisma and the talent to carry a blockbuster franchise. It’s almost embarrassing that the motion-captured aliens are far more emotive – not to mention infinitely more interesting – than their human counterparts. That being said, the film is an enjoyable sci-fi romp with some truly stunning visuals, and is definitely worth a look if you don’t mind feeling a sense of déjà vu.

Disney typically knocks it out of the park with their Blu-Ray releases, so it’s puzzling that John Carter has received such a lackluster video transfer. While colors look fantastic and black levels are deep, the sharpness and detail one expects from Disney are nowhere to be found. It’s not that the film looks bad, but when compared with other Disney releases like The Muppets, there is a noticeable downgrade.

Thankfully, the audio succeeds where the video fails. Rear channels are put to excellent use, particularly during the arena battle sequence, and the explosions and bellowing creatures will give your sound system a workout on the lower frequencies. Dialogue is also balanced extremely well, ensuring that it never becomes overpowered by the score or sound effects.

The commentary track from director Andrew Stanton and the film’s producers is engaging and enjoyable, but the remaining supplemental materials mark another area where this release falls far short of expectations. An 11-minute look at the life of author Edgar Burroughs barely scratches the surface, and the 360 Degrees of John Carter featurette explores a single day on the set of the film, offering little insight into the production as a whole. The blooper reel is painfully unfunny, and the deleted scenes were obviously deleted for a reason – except for the film’s original opening, which is far stronger than the version presented to audiences.

Much like the film itself, the John Carter Blu-Ray release is a mixed bag of excitement and disappointment, making for an enjoyable but flawed experience. Fans will certainly relish an opportunity to see it again, but may find themselves underwhelmed by the presentation.