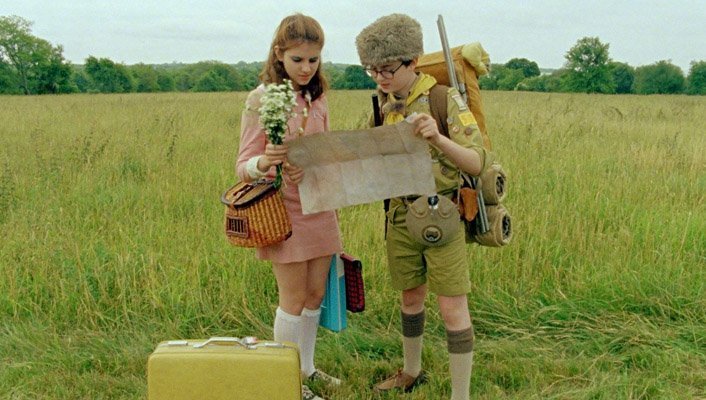 It’s the summer of 1965, and on a rocky island beach somewhere in New England, two preteen sweethearts are holed up in a canvas tent, far away from the families and authority figures that don’t understand them. Suzy (Kara Hayward) reads aloud from a children’s adventure book while Sam (Jared Gilman) lounges beside her, smoking a pipe and listening intently.

Less than 48 hours ago, Sam abandoned his Khaki Scout troop, leaving behind an empty tent and a bewildered scoutmaster (Edward Norton) to meet Suzy in a grassy meadow, where she stood with an armload of books and her little brother’s portable record player. As Suzy’s father (Bill Murray) patrols the area with the local police chief (Bruce Willis), her mother (Frances McDormand) discovers a box of letters detailing the planned rendezvous, and soon the chase is underway.

Written and directed by Wes Anderson, Moonrise Kingdom is an exploration of the innocence and purity of first love in an era that embraced such fanciful ideals. Anderson’s flair for eye-catching visuals and quirky, offbeat humor is still very much alive, and he coaxes brilliant performances out of his adult cast, especially Willis and Murray.

But it’s our two young stars, both appearing in their first roles, that truly bring the film’s central theme to life. So much emotion is conveyed via facial expressions, body language, and long bouts of silence that the audience never questions the bond between the young lovers – it’s as familiar to us as anything else we’ve ever felt.

With Moonrise Kingdom, Anderson has taken a brave step away from his comfort zone, eschewing the melancholia that permeates most of his work to make room for vagary and whimsy. The result is the most accessible film of the prolific director’s career, and quite possibly his best offering yet.

SECOND OPINION
Quirky, heartfelt, and adorably eccentric, Moonrise Kingdom showcases the best of what director Wes Anderson’s considerable talents have to offer. In a refreshing change from Anderson’s normal routine, the usual darkness of his films is scaled back to tell a sweet tale of odd first love supported by excellent performances by the adult cast. While not my personal favorite, Moonrise Kingdom is right up there with the top of Anderson’s belovedly hipster filmography.
4.5 stars
— Kyle