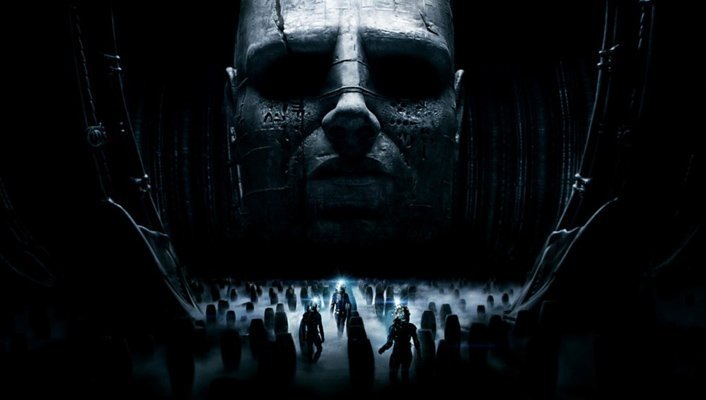 In the year 2093, a team of scientists aboard the research vessel Prometheus arrive on the distant moon LV-223 hoping to find evidence of man’s creation, which archaeologists Shaw (Noomi Rapace) and Holloway (Logan Marshall-Green) are convinced came at the hands of superior alien beings they’ve dubbed “Engineers.” The journey has been funded by the Weyland corporation, an interstellar conglomerate that has tasked top executive Meredith Vickers (Charlize Theron) with overseeing the mission, along with the support of an android named David (Michael Fassbender).

[pullquote_right]The film settles into a pattern of perplexing decisions that have neither motivation nor consequence.[/pullquote_right]Exploration leads the team to a subterranean dome, where they discover a cavernous room containing the headless body of an alien life form and a towering sculpture of a human face. Arranged meticulously around the idol are hundreds of canisters, each one slowly leaking a mysterious black liquid. With a violent storm moving in, the research team is forced to withdraw to the safety of the ship, but not before Shaw collects the decapitated alien head, and David secretly absconds with one of the canisters.

From this point forward, the film settles into a pattern of perplexing decisions that have neither motivation nor consequence. Why has David deliberately poisoned one of the crew members with liquid from the stolen canister? Why does the substance completely debilitate one scientist, while turning another into a hulking madman with superhuman strength? What really happened to the Engineers? How is David able to fluently speak an unknown alien language? And when fleeing across open terrain from a large, toppling object, why would you only run in a straight line?

From a visual standpoint, the film is absolutely stunning on every conceivable level, with a tremendous amount of detail in every surface. From the breathtaking vistas of LV-223 to the buttons and clasps on the excavation gear, everything about Prometheus is gorgeous, and the film should be a frontrunner for nearly every visual effects category during awards season.

Rapace, who cut her teeth on the original Girl With the Dragon Tattoo trilogy, continues to establish herself as the go-to girl for strong female leads, particularly during the film’s most harrowing scene, which takes place in the confines of an automated surgical capsule. The rest of the cast is given very little to work with, thanks to underwritten characters and ham-fisted dialogue, but there is one notable exception: Michael Fassbender. His portrayal of David is the best component of the film by a huge margin, and the nearly universal praise bestowed upon him by audiences and critics alike is very well deserved.

[pullquote_right]The film’s refusal to provide answers is a complete disservice to its audience.[/pullquote_right]With so much hype and anticipation surrounding its release, Prometheus was already one of the most talked-about films of the year, and its polarizing nature should guarantee that moviegoers will continue to discuss it for weeks to come. Some might call the ambiguity of Prometheus a deliberate and calculated decision by the filmmakers to foster discussion, but in a film whose central theme is the search for answers, the refusal to provide any answers of its own is nothing more than a complete disservice to the audience.