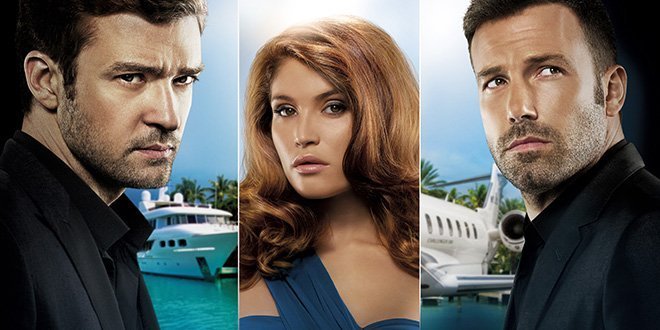 I should probably preface this review by admitting that I’m a huge fan of Ben Affleck: despite some unfortunate decisions earlier in his career, the man is undeniably talented both behind and in front of the camera. While recent years have seen him emerge as one of the premiere directors in Hollywood, he’s not above taking a flashy, scenery-chewing role from time to time, and his performance is one of the highlights of Runner Runner.

After getting busted by Princeton officials for referring students to a popular gambling site in exchange for a small commission, Richie Furst (Justin Timberlake) decides to try his luck at the poker tables in an effort to pay for his tuition. Everything goes according to plan until Richie goes all in on what seems like a sure thing, and gets cleaned out in the process. But the surprise defeat spurs an investigation which reveals that Richie has been cheated, a revelation that shouldn’t sit very well with the site’s owner, Ivan Block (Affleck).

Richie hops on a plane to Costa Rica and manages to arrange an audience with Block himself, who is so impressed with the youth’s moxie that he not only reimburses him for the loss, but offers him a job. But Block’s motivations may not be entirely what they seem, and navigating the complicated underworld becomes increasingly difficult when a hard-boiled FBI agent (Anthony Mackie) trying to bring Block to justice backs Richie into a corner.

Timberlake carries this film much better than his previous headlining efforts, but Affleck steals the show here, giving a gleefully frenetic performance that comes dangerously close to mustache-twirling territory. Gemma Arterton is also along for the ride, in a pointless romance angle that feels shoehorned into the proceedings and seems to exist for the sole purpose of allowing her to wear sexy outfits in every scene.

The Blu-ray release has little to offer in the way of special features: there are a handful of deleted scenes that run about ten minutes in length, a theatrical trailer, and a rather interesting featurette called House of Cards, which explores the rapid growth of the online gambling industry. At only 17 minutes, it’s less detailed than it could’ve been, and I found myself longing for a more in-depth examination of the culture and the people involved.

Runner Runner is a decent-enough thriller, but the rapid-fire pace of the storytelling, implausible dialogue, and unnecessary romance subplot make it difficult to become fully invested in the onscreen events. It’s an enjoyable film, but there isn’t enough to justify adding it to your collection.