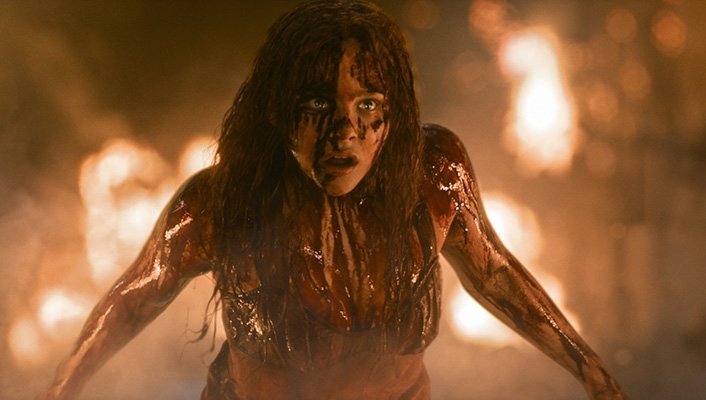 Let’s be honest – moviegoers will spend the entire film anticipating the iconic prom scene, and when Carrie’s frustration finally boils over into rage and she unleashes her power on those that have wronged her, it feels incredibly satisfying. It’s a shame that the climax is marred by excessive and unnecessary usage of CG effects, but when compared to the overall experience this is a pretty minor irritant.

Carrie paints an authentic (and at times, uncomfortable) portrait of a young girl’s sense of alienation, loneliness, and desire to be understood and accepted by those around her. Director Kimberly Peirce plays it safe with this remake, keeping the story beats and plot progression nearly identical, but updating them for new audiences and providing insight in the evolution of bullying in the age of social media. It feels a bit familiar, but still fresh enough to warrant giving this one a look.

Carrie arrives on Blu-ray with an impressive complement of special features. Director Kimberly Peirce provides an informative commentary track that offers insight into the film’s themes, but doesn’t delve much deeper than the surface. The disc also includes an option to view the film with its alternate ending, and there are about 10 minutes of deleted/alternate scenes available.

Creating Carrie is a pretty standard “making of” featurette, but I was particularly interested in the Tina on Fire segment, which showcases the techniques used in creating Tina’s death scene at the prom, using real fire rather than CG. There’s also a brief discussion of the portrayal of telekinesis in the film, and an amusing PR stunt involving a coffee shop and some hidden cameras.

As noted in my original review, Carrie is a perfectly watchable film, but adheres so closely to the original that it has difficulty establishing its own identity. The supplemental materials provide plenty of additional content to pore over, but there’s not much here to warrant repeat viewings.