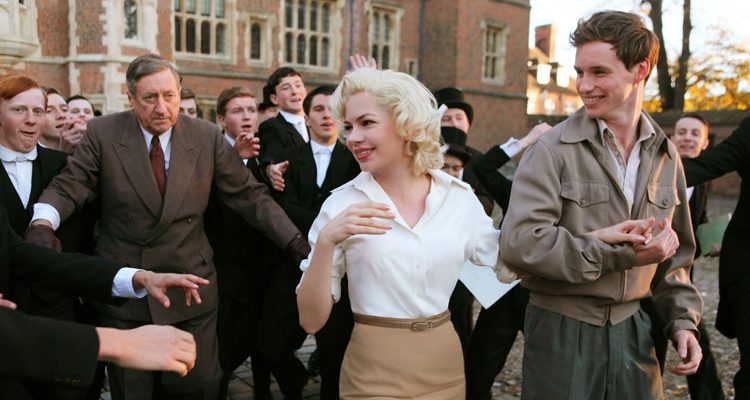 [pullquote_right]A glimpse at the fragile, vulnerable young woman behind the innocent, fun-loving persona.[/pullquote_right]My Week with Marilyn tells the story of Colin Clark (Eddie Redmayne), a young production assistant working for Sir Laurence Olivier (Kenneth Branagh) during the production of The Prince and the Showgirl, which would unite Marilyn Monroe (Michelle Williams) with the esteemed actor. In addition to her frequent tardiness, Monroe insists that her manager and acting coach be nearby at all times, whether sitting next to her during a table read of waiting just off camera during the shoot, causing Olivier’s patience with the young actress to wear thin very quickly.

The repeated clashes between Olivier and Monroe only fuel her insecurities, driving her further inward and causing her to seek solace in Colin, whose innocence and naiveté pave the way for a unique sort of friendship. Like so many others, Colin is hopelessly in love with Monroe, and seems to be the only person willing to understand and accept the woman behind the façade.

Actors build their careers by taking words on a page and transforming them into living, breathing human beings that evoke an emotional response from the audience. This is difficult enough when the character they create is one of pure fiction, but when portraying someone who actually existed, especially someone who spent a large portion of their life in the public eye, this process becomes exponentially more complicated.

[pullquote_left]Michelle Williams perfectly captures the essence of the cinematic icon.[/pullquote_left]Luckily for the audience, Michelle Williams is a special breed of actress, and she gives a mesmerizing performance as Monroe, perfectly capturing the essence of the cinematic icon. Williams pulls back the curtain and gives us a glimpse at the fragile, vulnerable young woman behind the innocent, fun-loving persona that she displayed for the public, and in doing so gives us a new appreciation for Monroe’s tragic story.

In addition to Williams, who received an Oscar nomination and a Golden Globe for her astonishing performance, Branagh is captivating in his portrayal of Olivier, meticulously recreating the legendary thespian with an astounding level of accuracy. As Clark, Redmayne is perpetually wide-eyed and starstruck, and telling the story from his perspective allows the audience to view the world – and Monroe – with an almost child-like level of wonder.

My Week with Marilyn features a beautiful high-definition transfer with a warm, rich color palette that causes Monroe’s white dress and red lipstick to pop off the screen, and seems heavily influenced by photography from the same time period in which the film takes place. Audio is crisp, if a bit underwhelming, and dialogue delivery is always clear.

[pullquote_right]Curtis has crafted a truly fascinating study of a long-lost era of stardom.[/pullquote_right]The Untold Story of an American Icon is a standard-issue behind-the-scenes featurette. The brief comments from the cast members provide little insight, but the newsreel footage and original photographs give the viewer a new level of appreciation for the painstaking attention to detail in the film. The commentary track is much more entertaining and informative, with director Simon Curtis providing a wealth of information on Monroe, as well as some interesting anecdotes about the production.

Curtis and his talented cast have crafted a truly fascinating character study, not just of Monroe herself, but of a long-lost era of filmmaking and stardom, the likes of which we’ll never see again. This is an excellent film that looks and sounds fantastic on Blu-Ray, and is certainly not one to be missed.