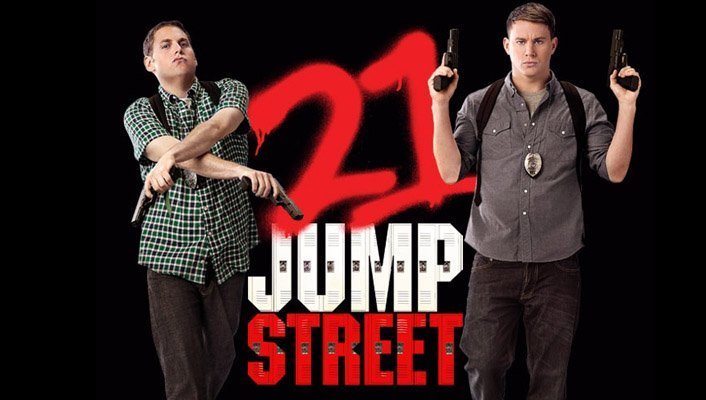 Schmidt (Jonah Hill) and Jenko (Channing Tatum) didn’t get along in high school, but find themselves forming an unlikely friendship when they reconnect seven years later during police academy training. The overzealous duo botches their first arrest on a technicality, resulting in their subsequent reassignment to a newly revived undercover program from twenty years ago that will send the pair back to school to track down the supplier of a new synthetic drug.

After mistakenly switching their new identities, Jenko finds himself stuck in advanced-placement courses, surrounded by brainy teenagers that jailbreak phones to earn extra income and play Bakugan in the chemistry lab after school. Schmidt is likewise out of his depth as he gets enrolled in drama and assigned to the track team, but manages to get close to the biggest dealer on campus, Eric (Dave Franco).

Whether it’s Tatum trying to complete a complex chemistry formula in front of the class, or Hill smashing opponents with his baton during a relay race, watching the stars play completely against type results in plenty of awkward and hilarious moments. Tatum in particular shows a tremendous amount of promise as a comedic performer, and is infinitely more likeable in this film than any of his previous works. He has a certain amount of charisma here, and his onscreen friendship with Hill has a very natural quality.

The screenplay by Michael Bacall and Jonah Hill is full of self-deprecating humor, poking fun at the numerous amount of improbabilities littered throughout the film, as well as Hollywood’s penchant for remakes. You’ll also find plenty of intentional action-movie clichés, including an angry black police captain (Ice Cube) and a high-speed freeway chase with exploding vehicles which plays out much differently than you might think.

21 Jump Street pays homage to the spirit of the television series while simultaneously updating it for a new audience. Taking the basic premise of the original and turning it into a comedic adventure was a smart choice – the laughs are frequent, the action beats are well-placed, and the overall experience is one that audiences will enjoy.