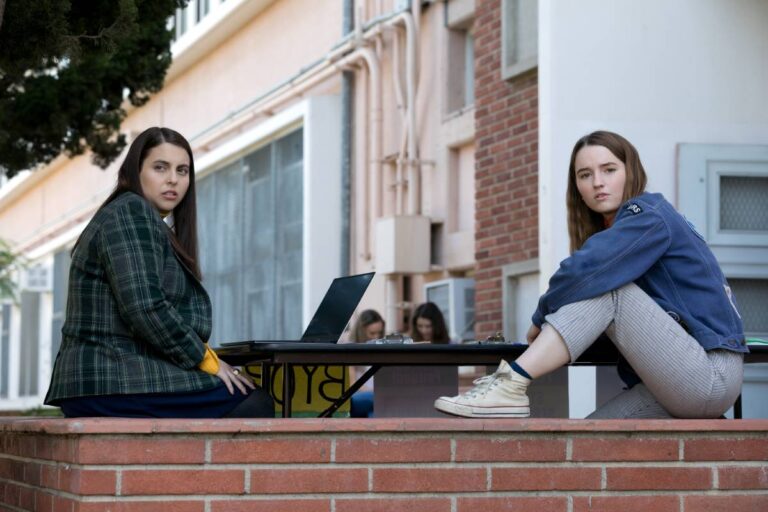 A hilarious story about a pair of overachievers trying to party with the cool kids at the end of their senior year, Olivia Wilde’s Booksmart is one of the strongest directorial debuts in recent memory. Not only that, but with its razor sharp script and electric lead performances, it could very well unseat the likes of Superbad and Mean Girls as the funniest high school comedy of the 21st century.

Beanie Feldstein (Lady Bird) and Kaitlyn Dever (Them That Follow) star as Molly and Amy, lifelong besties whose idea of fun is watching Ken Burns documentaries or using fake college IDs to slip into 24-hour libraries. Rigorous devotion to their textbooks has paid off in the form of acceptance to Ivy League schools, but years of prioritizing test scores and extracurricular activities has left them disconnected from their classmates. They haven’t exactly been ostracized, but they’re clearly regarded with a mix of disdain and bewilderment — as one guy quips, when joking about the prospect of seducing Molly, “I bet her vagina is stuffed with diplomas.”

Unbeknownst to this group of gossipers, Molly is within earshot, and the scathing diatribe she delivers about focusing on her future and refusing to waste her potential by is positively withering. Or it would be, if pretty and popular Triple A (Molly Gordon) didn’t hit her with an unfortunate truth bomb: she got into Yale, too. As for the others, they’re headed for Georgetown, Stamford, and Harvard. A flabbergasted Molly tries to make sense of this news — “That’s not possible, you guys don’t care about school,” she stammers — but she’s got it all wrong. “We don’t only care about school,” says Triple A.

Discovering that her chosen path to success wasn’t the only option available leaves Molly crestfallen, but hope is not yet lost: it’s the night before graduation, and the biggest party of the year is being thrown by Nick (Mason Gooding), the handsome and popular jock with whom every female in their class is enamored — as Amy so eloquently puts it, “delegates from every group of girls are casting their ballots for his penis.” She’s not keen on the idea of stepping outside her comfort zone, but Molly reminds her that the object of her affection — androgynous skater Ryan (Victoria Ruesga) — will also be at the party. Despite coming out in sophomore year, Amy’s experience with romance is virtually non-existent, and the opportunity to share a moment with Ryan is too tempting to pass up.

Thus begins Booksmart‘s Odyssey-esque adventure as the girls embark on a series of mishaps en route to a party whose destination they don’t even know. From one increasingly improbable but undeniably hilarious scenario to the next, Molly and Amy encounter a parade of fascinating and brilliantly utilized supporting characters, from the ultra-rich Jared (Santa Clarita Diet‘s Skyler Gisondo) to the witchy, free-spirited party girl Gigi (Billie Lourd in a wildly magnetic and unabashedly batshit performance). Through it all, Feldstein and Dever prove their comedy chops are among the best of their generation, but the laughs wouldn’t land nearly as well if we didn’t buy into the relationship between Molly and Amy.

Luckily, that’s not an issue here. Not only does the friendship of our two heroines feel authentic and genuine, but it’s also delightfully positive. Mean Girls showed us “friends” that would spew vile and vitriol behind each other’s backs, but Booksmart introduces us to girls that go out of their way to prop each other up (a favorite recurring theme is Molly and Amy “arguing” about which one is more beautiful). Some of their exploits and hijinks may feel contrived or unbelievable, but nothing about Molly and Amy themselves ever rings false.

Behind the camera for the first time, Wilde displays the confidence of a seasoned pro as she weaves nuanced, beautifully realized character moments among Booksmart‘s onslaught of jokes. From Molly’s cathartic (and somewhat begrudging) admission of a secret crush to the sweet and painful awkwardness of Amy’s first sexual encounter, Wilde ensures there’s an undercurrent of truth to everything the girls — and the audience — experience. The result is a film that offers nearly as much heart as it does hilarity, an instant classic destined to become a landmark entry in the genre.