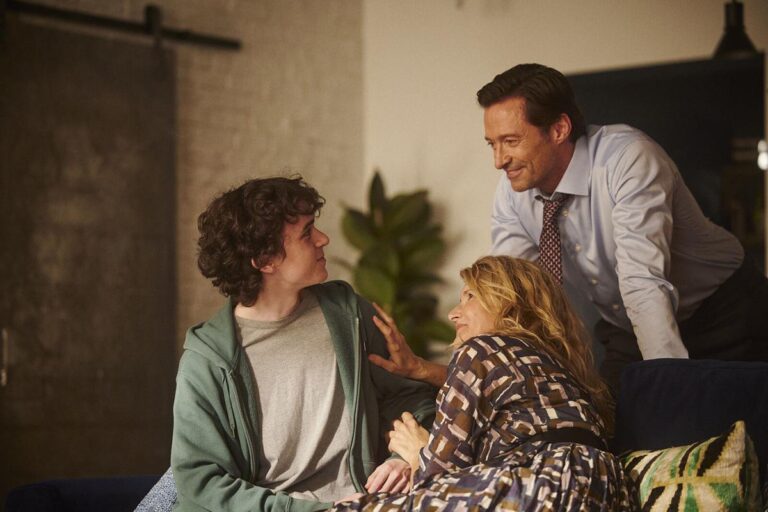 After garnering praise from critics and audiences alike for his gut-wrenching portrayal of dementia in 2020’s The Father, writer-director Florian Zeller seems destined to squander the bulk of that goodwill with his next feature, The Son. As with its predecessor, the film is adapted from Zeller’s own stage play of the same name, and follows another family as they grapple with the devastating effects of mental illness. But the empathy and sensitivity with which the topic was approached in The Father is nowhere to be found in The Son, disappearing completely under thick layers of melodrama.

Hugh Jackman portrays Peter, a Manhattan lawyer who left ex-wife Kate (Laura Dern) for the younger Beth (Vanessa Kirby), resulting in a rather shaky relationship with his 17-year-old son, Nicholas (Zen McGrath). The divorce has seemingly taken a severe toll on the boy’s mental health, and after repeated bouts of absenteeism at school and experimentation with self-harm, he begs to come live with Peter. The change of scenery appears to be working, until Peter and Beth discover that Nicholas has continued skipping school and is becoming more and more withdrawn. But Peter, preoccupied with career ambitions and the arrival of a new child with Beth, is ill-equipped to connect with his son on any meaningful level. Instead, he often becomes visibly frustrated and raises his voice, painting himself as cold and compassionless, rather than the loving parent that Nicholas clearly needs.

As for Nicholas, Zeller’s depiction of a teen in mental crisis feels both clumsy and irresponsible in its simplicity. McGrath may be a fine actor, but the screenplay does him no favors, leaving zero room for nuance or subtlety. It doesn’t help that Nicholas is more of an ancillary character, as The Son seems more interested in how Peter, Beth and Kate are affected by his depression than it does with exploring the illness itself. But by keeping Nicholas on the fringes, the result is that we, too, have difficulty connecting with him, leaving us with only Jackman’s unsympathetic character to latch onto. That Zeller was unable, or perhaps unwilling, to explore these familial dynamics through the same lens that made The Father such a compelling drama is unfortunate, and more than a little disappointing.