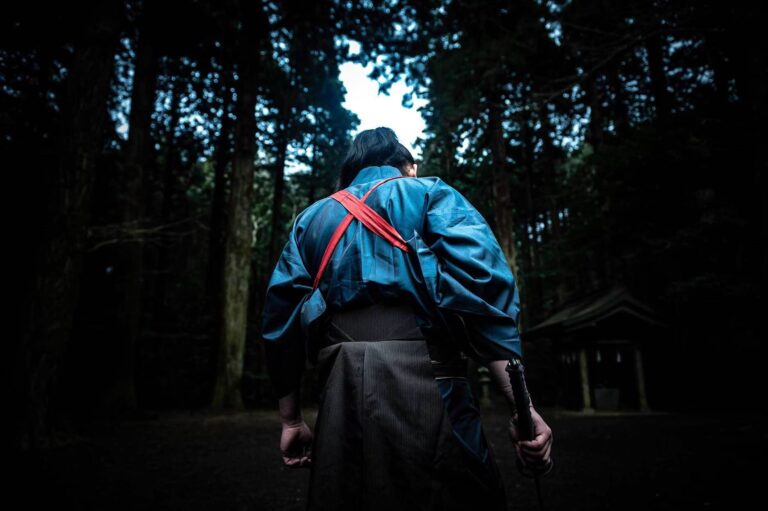 An impressive feat of physical endurance exists at the center of Crazy Samurai Musashi, as lead actor Tak Sakaguchi cuts his way through nearly 600 opponents over the course of 75 minutes in a single, unbroken take. Screening as part of the 2020 Fantasia International Film Festival, the latest from director Yûji Shimomura is meant to depict one of the most famous battles in the career of legendary samurai Miyamoto Musashi, as he faces off against an army of henchman and mercenaries hired by the Yoshioka clan.

The notion of an epic-length samurai battle filmed in a single take is intriguing, but the novelty quickly wears thin, mostly thanks to bare-bones camera work and overly simplistic fight choreography. While the real-life historical figure is credited with conceiving the two-sword fighting technique known as Niten Ichi-ryū, Sakaguchi’s portrayal of Musashi rarely employs a second blade — and when he does, it’s often discarded within moments of being picked up. Granted, being able to memorize 75 minutes of intricate swordplay would’ve been a tall order to fill, but a bit more variety would’ve helped to make Crazy Samurai Musashi‘s centerpiece more engaging.

As it stands, Sakaguchi employs the same handful of maneuvers to dispatch wave after wave of identical enemies, only changing tactics when a larger, more powerful enemy arrives — like video game bosses, these opponents march onto the battlefield full of bravado, but even they find themselves quickly dispatched. There are brief moments of respite, as our hero occasionally stops to drink some water and wonders aloud “how many men do they have?” before the chaos resumes.

Crazy Samurai Musashi is bookended by a pair of much better-looking sequences, one taking place moments before the battle begins, and another picking up many years later, seemingly near the end of Musashi’s life. Both scenes have noticeably better production values and are shot in a more traditional style, with multiple cuts and dynamic camera angles. While the physical demands of Sakaguchi’s performance are certainly praise-worthy, one can’t help but wonder if employing these same techniques for the entire production might have resulted in a more compelling and entertaining film.