Movie Review: ‘The Devil All the Time’ 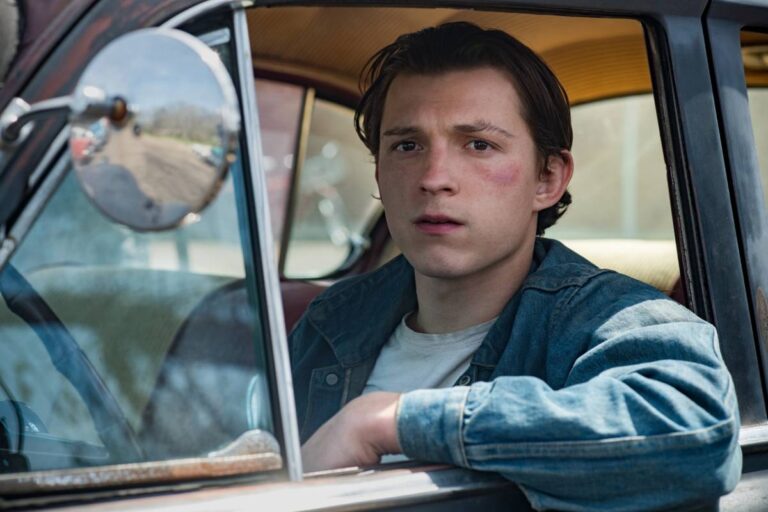 “Some people were born just so they could be buried.” This quote from The Devil All the Time, the latest offering from Antonio Campos (Christine), is a fairly apt description of the film itself. Set in a pair of rural Appalachian towns and taking place over the course of a decade in the mid-1950s and 1960s, this Gothic thriller is awash with creeps, villains and deviants, most of whom won’t make it to the end credits.

Narrated by Donald Ray Pollock, who penned the 2012 novel on which the film is based, The Devil All the Time is comprised of multiple intersecting plotlines featuring a host of unsettling (and often unsavory) characters. There’s the young WWII veteran (Bill Skarsgård), haunted by visions of a crucified comrade, who believes the man upstairs will cleanse the cancer from his wife (Haley Bennett) if he just prays hard enough; the fire-and-brimstone minister (Harry Melling) who proves his faith in the Lord by pouring a jar of spiders on his face in the midst of Sunday service; and a murderous married couple (Riley Keough and Jason Clarke) with familial ties to the county sheriff (Sebastian Stan), who’s too deep in the pocket of a local mob boss to notice anything amiss.

Then there’s Arvin, played at nine years old by Michael Banks Repeta. He’s the son of the aforementioned war veteran, and after a series of tragic circumstances finds himself living with an elderly couple caring for the orphaned Lenora (Eliza Scanlen). As the years pass, the girl’s piety makes her a target for ridicule at the hands of the local bullies, and Arvin — now played as a teenager by Tom Holland for the film’s second half — isn’t about to let anyone mess with his “little sister” and walk away free of retribution.

When a smooth-talking new preacher (Robert Pattinson) rolls into town, Arvin instinctively knows something isn’t right. “That ain’t no preacher,” he tells his adopted grandmother. “He’s as bad as they got on the damn radio.” Arvin’s discovery of just how right he is, and the ensuing confrontation borne from that discovery, is one of this year’s most tension-filled cinematic moments — and The Devil All the Time still has more up its sleeve as its seemingly disparate narrative threads begin to converge.

Holland’s performance isn’t the flashiest — that honor belongs to Pattinson’s rapacious reverend — but it’s certainly the most interesting, and miles removed from his best-known work as Marvel’s resident webslinger. Tormented by the events of his childhood, there’s an air of sadness that lingers over Arvin, and he moves through life with a quiet sort of intensity that borders on terrifying once it boils over, as evidenced in a sequence where he hunts down Lenora’s high-school harassers and dishes out a brutal comeuppance. Clarke also deserves kudos for dialing the creep factor up to eleven, and viewers shouldn’t be surprised to find their skin crawling whenever he shows up.

Campos clearly has affection for the source material, but certain elements might have worked better on the page than on the screen, such as the narrator casually giving away plot points or revealing the fate of specific characters well in advance. This little idiosyncrasy robs certain moments of their impact, because we’ve already spent considerable time waiting for something to happen, rather than discovering it on its own. The Devil All the Time also feels a bit unwieldy in its first half, as we hop from one story to the next, but levels out and remains fairly linear once Holland enters the picture. The overall bleakness of its story may not be everyone’s cup of tea, particularly in a time where gloom and doom often seems to permeate our every waking hour, but if you can stomach the weighty subject matter, you’ll be treated to some absolutely stellar work from the ensemble cast.