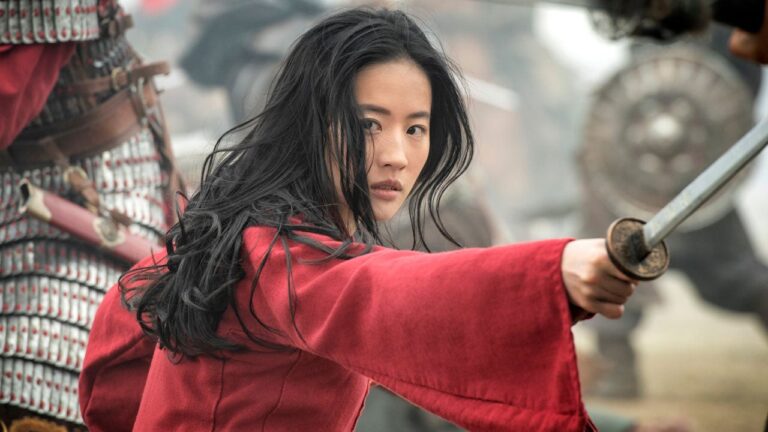 1998 adventure Mulan isn’t quite regarded with the same reverence as other classics from the Disney Renaissance, like Aladdin or Beauty and the Beast, but as a beloved entry in the studio’s animated catalog, it was only a matter of time before the remake train came hurtling by. Thankfully, the 2020 live-action update of Mulan is a worthy successor to the original, more akin to 2015’s refreshing spin on Cinderella than last year’s visually arresting but hollow remake of The Lion King.

The overall story hasn’t changed much: when ruthless warrior Bori Khan (Jason Scott Lee) leads an invasion of China, the Emperor (Jet Li) decrees that each family must send one man to join the Imperial Army and defend the kingdom. Hua Mulan (Liu Yifei), daughter of decorated veteran Hua Zhou (Tzi Ma), knows that her father is not likely to return from battle, and attempts to preserve his life by masquerading as a man and joining the army in his place — an act punishable by death, if she were to be found out.

Into this familiar tapestry is woven a story about gender roles: the film’s prologue reveals that Mulan is uniquely gifted in the art of battle, a skill her father cultivates until her habits come under scrutiny of the village matchmaker. “What man would want to marry a girl who flits around on rooftops?” she asks scornfully. “A daughter brings honor to her family through marriage.” Mulan may be blessed with powerful qi — a life force at the center of many Chinese martial arts — but Hua Zhou urges her to hide her gift away. “Qi is for warriors,” he tells her. “Not daughters.”

Joining a unit of recruits under the leadership of Commander Tung (Donnie Yen), a cursory glance at the sweaty, hairy, half-naked bodies all around tells Mulan that keeping her secret won’t be an easy task. She volunteers for additional guard duty to avoid bathing with the rest of the recruits, tries to make small talk about the ideal qualities in a woman, and develops a friendship — and rivalry — with handsome young soldier Honghui (Yoson An). But when frustration gets the better of her during a training exercise, Mulan unleashes her power, startling her fellow troops and impressing her commanding officers. So much for keeping a low profile.

Viewers waiting for a diminutive dragon to show up with Eddie Murphy’s voice may be in for a surprise, as the only fantastical creature to be found in Mulan is a phoenix, which the Hua family reveres as a guardian. That is, of course, unless your definition of “fantastical creature” includes Xianniang (Gong Li), a shapeshifting witch who serves as Bori Khan’s most fearsome enforcer — and whose experience as a powerful woman in a world ruled by men feels eerily similar to Mulan’s own upbringing . “I was a girl like you when people turned on me,” she tells Mulan. “The more power I showed, the more I was quashed.”

Mulan is clearly inspired by the wuxia films that first became become popular on Western shores in the early 2000s — particularly the works of Zhang Yimou, who combined luxurious, intricately detailed costumes and vibrant splashes of color to create jaw-dropping visuals in films like House of Flying Daggers. It’s probably no coincidence that Mulan also features three of Yimou’s most notable collaborators: Jet Li squared off against Donnie Yen in Yimou’s 2002 martial arts epic Hero, which became the first Chinese language film to top the North American box office, and Gong Li made eight films with Yimou over the course of her career, including 2006’s Curse of the Golden Flower.

Unfortunately, another hallmark of wuxia films — highly stylized, nearly superhuman action sequences — doesn’t always work in Mulan‘s favor. Most of this can be attributed to a directorial style that relies too much on close-ups and rapid cuts: a 30-second sequence where Mulan leaps from horseback to dispatch a spear-throwing opponent contains 28 different shots. This approach makes the battle scenes feel too busy, and diminishes the ability of the viewer to appreciate the acrobatic, almost balletic fight choreography.

Complaints about the action sequences notwithstanding, director Niki Caro has made a stunningly beautiful film, with dazzling colors and rich detail in every frame. She pays tribute to some of the animated film’s most iconic visual moments, like the burned-out village left in the wake of the invaders, and the avalanche that helps turn the tide of battle, and Liu Yifei imbues the title role with ample heart and emotion.

Epic in scope and extravagant in its production design, Mulan would clearly have been a joy to experience in the theater, and it’s a shame the world has changed so much over the last few months that audiences won’t have that opportunity. That said, until life returns to something vaguely resembling normalcy, the ability to view a major studio tentpole from the comfort of your living room is a pretty solid consolation prize, but here’s hoping Disney opts for a limited theatrical run in the future, as Mulan is certainly worthy of the big screen presentation.