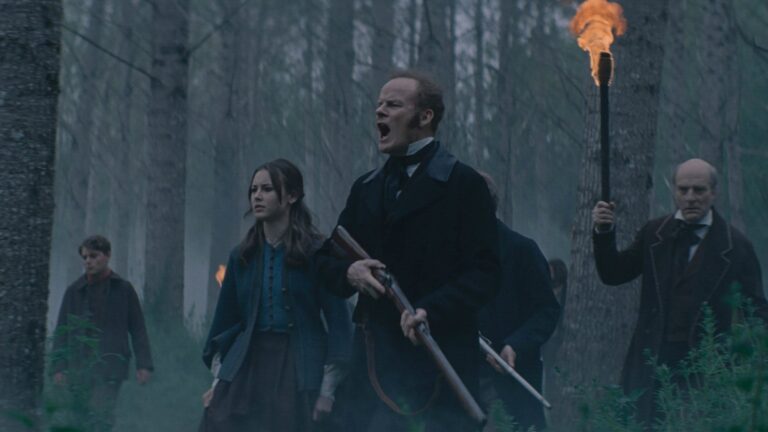 While mostly known for its dramatic selections, the Sundance Film Festival has played host to some stellar horror entries, particularly in recent years with standouts like The Babadook (2014), The Witch (2015) and Hereditary (2018) — not to mention Jordan Peele’s electrifying 2017 feature, Get Out. With the 2021 Sundance Film Festival moving to a digital offering this year, the shared experience of sitting in a dark auditorium full of equally terrified audience members has unfortunately been eliminated. But fear not: Eight for Silver, the latest from writer-director Sean Ellis, is still capable of providing the requisite frights that one might expect from a Sundance scarefest.

It’s the late 19th century, and Seamus Laurent (Alistair Petrie) finds his status and livelihood threatened by a Romani clan, returning to lay claim to the ancestral lands they once called home — the same lands where Seamus and his family now reside. When attempts to negotiate with the Romani fail, Seamus dispatches a band of mercenaries to deal with the problem, in horrific fashion: the encampment is set aflame, and the clan is brutally massacred as the architect of their demise looks on from the hillside. The bulk of this sequence is presented as a single, unbroken shot from the perspective of Seamus himself, and seeing the violence unfold at such remove makes it all the more chilling.

But the savagery inflicted on the Romani is only the beginning. Within days, the local children begin to have nightmares, all of them sharing the same visions. Seamus’s son Edward (Max Mackintosh) is viciously attacked, and subsequently vanishes from his bedroom in the middle of the night, and pathologist John McBride (Boyd Holbrook) arrives to investigate the disappearance shortly before a local peasant boy, whose father is under the Laurent family’s employ, is found torn to pieces. The attack is blamed on a wild animal, but McBride knows the true nature of the boy’s death — and the fate of young Edward — is something far more terrifying. “Your people are being hunted,” he warns.

Eight for Silver takes full advantage of the French countryside to craft a wonderfully creepy atmosphere, combining the gloomy, fog-shrouded woods and the shadowy candlelit hallways of the Laurent manor to elicit a near-constant sense of unease. Nightmarish creatures lurk in the darkness, but Ellis demands patience from the viewer, refusing to reveal what sort of beast is terrifying the townsfolk until well into the film’s second act. When we’re finally permitted to see the monster for ourselves, the result is more abhorrent than we could’ve imagined, and even ardent fans of body horror are likely to find themselves grossed out by this sequence, which easily ranks as Eight for Silver‘s most disturbing.

Holbrook is no stranger to genre films, channeling the same charisma he showcased in Logan and The Predator while layering in the sort of brooding intensity that made him so watchable during the first two seasons of Narcos. As Seamus, Petrie is perfectly detestable in his self-righteousness, while Amelia Crouch impresses as eldest daughter Charlotte, and Kelly Reilly makes the best of an underwritten role as the concerned mother who knows her husband is hiding a ghastly secret.

Eight for Silver is bookended by a pair of sequences that take place some 35 years after the events involving Seamus and McBride, a framing device which adds little to the narrative while also telegraphing the film’s climax (hopefully the clues revealed during the prologue will go overlooked by some viewers). But when everything else works as well as it does here, it’s easy to forgive those choices — Ellis has constructed a moody, effective supernatural yarn full of gruesome imagery and genuine scares that should be well-received by genre aficionados.