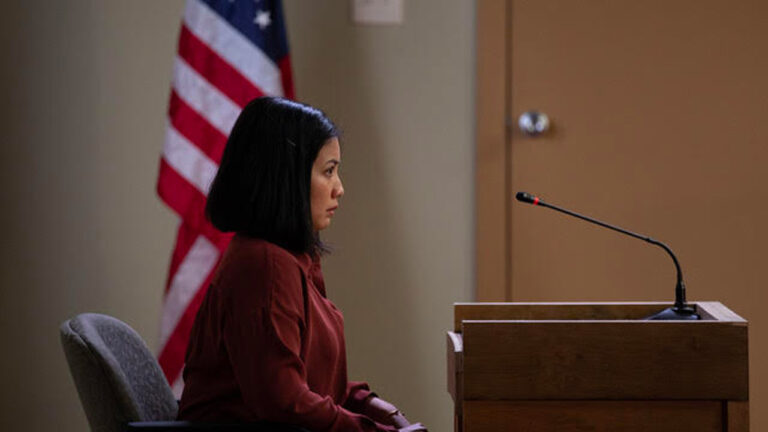 Premiering at the 2022 Tribeca Film Festival, The Courtroom tells the real-life story of Elizabeth Keathley, a Filipina immigrant risking deportation for registering to vote without being a US citizen. Adapted verbatim from the actual court transcripts, this riveting drama from director Lee Sunday Evans and writer Arian Moayed draws back the curtain to provide a glimpse of the often harrowing reality of the US immigration process.

We caught up with Evans and Moayed shortly before the premiere to chat about the inspiration for crafting a legal thriller with no embellishments, and the importance of shining a light on these real-world experiences.

(Note: this interview has been lightly edited for length and clarity)

This was right up my alley — I’m a sucker for courtroom drama, so as soon as I read the premise, I was in. And I really love the idea of everything that happens in the film coming straight from the actual transcripts — it’s not embellished. What was it about this case that made you think “oh, we can definitely do something with this.”

Arian Moayed: I think there’s something about the truth being stranger than fiction in this world that we live in. But honestly, it was all a fluke and it just kind of happened — fate was in our hands. The idea of reading the deportation cases, I was just wondering “what can I glean from this?” And within a few weeks, I was reading this case and I just felt that when it got to the point where someone said “would you like a tissue” — remember that?

In the transcript, it doesn’t say that Elizabeth Keathley is crying on the stand — it just says that someone is offering her a tissue. But as an immigrant, whose parents don’t speak English well and [have been in situations] like this, I was like “oh my god, she’s having a breakdown right now.”

Lee and I are theater makers, and we love and care about film and TV and we watch nerdy movies, and we also know what a thriller is like, and the transcript just lent itself to this kind of classic arc, but with surprises. So that’s kind of what happened..

I’m glad you brought up coming from a theater background, because it feels like this could have easily been staged as a theater production. Right from the opening shot, you’re not shy about showing that this is a soundstage, not a real courtroom — this is something that has been constructed. Was there ever a consideration about doing this on the stage, or was it always meant to be a film?

Lee Sunday Evans: We actually developed it as a stage production, but the irony is that we actually did the stage production on location, in actual real courtrooms around New York City — including this incredibly beautiful, very hallowed courtroom, the 2nd Circuit Court of Appeals in the Thurgood Marshall courthouse. So where you would normally go to film a movie to get a real location and film in a beautiful, ornate courtroom that you could never build as a set, we actually inverted that.

When we went to make the film, Arian and I were talking a lot about how we could disrupt the normal way of watching courtroom dramas. In the United States, we’re kind of obsessed with procedural crime dramas, we watch them all the time and they’re so pervasive, so we have a kind of mode of watching them as an audience member. And we felt that, because these were transcripts, we wanted to remind people in some small way that this is more of a reenactment of a real life story, as opposed to a crafted courtroom story.

You mentioned courtroom dramas being sort of ingrained in our culture, and many of those are pulled from real events. I think The Trial of the Chicago 7 is the most recent example, but even as interesting as the actual case was, Aaron Sorkin still took that and embellished and made changes for dramatic effect. As you were developing this story, was there ever any consideration given toward doing the same kind of thing, and inflating it a bit? Or did you always feel the actual story was more than enough, and didn’t need any real changes?

Lee Sunday Evans: I think we found that some of the things that you would normally cut because they might drag on too long or seem boring, we found some of those details about immigration court to be really interesting. Even just the fact that the judge doesn’t have a stenographer, but has to enter the information and handle their own transcription recording of the proceedings–

I had never seen that before!

Lee Sunday Evans: Exactly! It might seem like a strange, “boring” detail — or another example, the citizenship oath is very long, and a lot of it is “boring” but it’s interesting because we never see that depicted! As someone born in this country, I didn’t know what the Naturalization Oath was, but to watch the whole thing and to keep those details we just found to be very interesting.

The second thing I’ll say is that this is an extraordinarily volatile moment in our politics and in our culture around what is truth, what are facts, and what is actually going on with immigration. Who really are immigrants? What are the real issues they’re facing? We felt like the transcripts also had a very particular kind of integrity and a bit of objectivity that we felt was important in this cultural moment.

Going back to Sorkin, I felt The Trial of the Chicago 7 was really incredible and it’s a remarkable story, but we’re very adept audience members and we can feel when we’re being led through the most dramatic version of those events. I think we wanted to risk the “boring” moments to try and earn a different kind of trust or engagement from the audience.

I definitely agree: when you watch something like Chicago 7, you can feel the artifice. I think the reason people enjoy procedurals and courtroom dramas is they’re sort of comforting: if you’ve seen more than a few, you know what the beats are and you know what to expect, so you have a good idea of what you’re getting yourself into from the moment you sit down. Whereas here, a lot of those smaller details feel fresh and interesting because we haven’t really seen them showcased before.

Arian Moayed: I just want to add one more thing, and that’s in this really mundane, simple story of one case, you also have these thrilling moments — from an audience perspective — because this woman’s life is on the line! We’re watching this really mundane thing, but the stakes are literally her entire existence.

Right, and the timeline is so heartbreaking. The first 30 minutes or so are the original case, and then it’s more than three years before we move to the appeals court. And you just think about this poor woman and her family, it just feels insane that her life is hanging in the balance while our system moves at a snail’s pace. It’s sort of preposterous that we put people through this.

Arian Moayed: It is, and [that’s why] I think we’re just happy to get this out there into the world. It’s less about the art of it, even though I’m so proud of everything we’ve done, I just feel like people need to see more stories like this, to see what immigrants have to go through. We want to show people this really complicated world, and kind of tackle a lot of the myths out there about immigrants and about the law — most people don’t even know what happens in immigration court, they don’t know that it often takes place in a room that looks like the DMV. We hope this story can help shed some light on their journeys and kind of demystify them a little bit.

Lee Sunday Evans: It’s such an honor to be in the Tribeca Festival, and it’s really fun that it’s in our hometown. We’re really excited to get this film out there, but I think we’re most excited about learning from this festival experience about what the potential is for this film to reach more people.

Find more of our Tribeca 2022 coverage at this link.