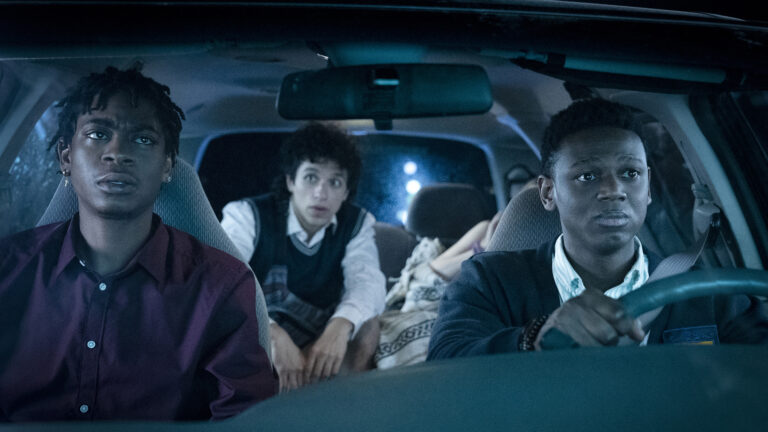 Emergency stars Donald Elise Watkins and RJ Cyler as two best friends with a singular mission: to become the first Black students at their university to complete the “Legendary Tour,” hitting the seven largest and most debaucherous fraternity parties in a single evening. But what seems at first to be a paint-by-numbers college party film takes a radical turn when the boys arrive home to prepare for the evening ahead, and discover an unknown, unconscious white girl (Maddie Nichols) on their living room floor.

Straitlaced Kunle (Watkins), the son of two doctors and well on his way to a graduate program at Princeton, pulls out his phone to dial 911, but Sean (Cyler) slaps it out of his hand and into a pool of the stranger’s vomit before trying to bring his pal back to reality. When the police show up to a house that reeks of weed to discover a passed out white girl and two young Black men, they’re liable to end up in handcuffs, or something far worse. But Kunle isn’t comfortable with the “do nothing” approach, so with the help of their awkward, video game-obsessed roommate Carlos (Sebastian Chacon), a compromise is reached: the boys will drive her to the hospital themselves.

The mishaps and setbacks that befall our heroes on what should be a fairly simple jaunt across town are played for laughs, but Emergency never lets the audience – or its characters – forget the pivotal role race plays in every decision, every scenario, every misunderstanding. Nowhere is this illustrated better than during the film’s climax, a harrowing moment where Kunle is forced to reckon with the harsh reality that his academic achievements and bright future don’t make him any less menacing to someone who refuses to look beyond the color of his skin. It’s a tough pill to swallow, even if Sean has been trying to feed it to him all night, and Emergency handles the material expertly.

Director Carey Wiliams and screenwriter K.D. Davila adapt their award-winning 2018 short into a wild road trip buddy comedy that channels the dark hilarity of Very Bad Things and the social consciousness of Blindspotting. Williams turned more than a few heads with last year’s Shakespeare-meets-social-media riff R#J, and this follow-up effort cements him as an exciting new talent to watch.