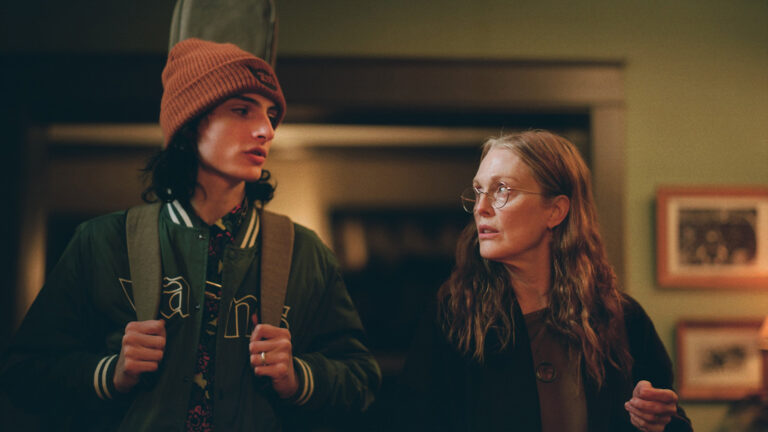 When You Finish Saving the World finds Jesse Eisenberg stepping behind the camera for the first time, adapting his acclaimed audio drama into a feature length film about a pair of narcissists. Teenage live-streamer Ziggy (Finn Wolfhard) plays folk music for his 20,000 online followers, but can’t seem to catch the attention of politically conscious chemistry classmate Lila (Alisha Boe). Meanwhile, his mother Evelyn (Julianna Moore) operates a shelter for victims of domestic abuse and barely attempts to hide her disdain for Ziggy’s failure (or perhaps refusal) to live up to her lofty expectations.

Nearly every interaction between Eveyln and Ziggy is excruciating. Passive aggression is the weapon of choice, but it never takes more than a few moments for things to escalate into full-on warfare, both slinging insults across the dinner table while dad Roger (Jay O. Sanders) sips wine and keeps his mouth shut. These frequent moments of discomfort bear similarity to some of Eisenberg’s past work as an actor, particularly Noah Baumbach’s The Squid and the Whale, and whether unconscious coincidence or intentional homage, they’re effective at keeping the audience on edge.

When You Finish Saving the World dials up the cringe factor as Ziggy tries to impress Lila, first by pretending to understand any of the topics she discusses at lunchtime with other activist-minded classmates, then by taking a poem she recites and setting it to music. As his mom notes after he unironically inquires “do you think I could be political?” Ziggy’s just looking for a shortcut, instead of putting in the time and doing the work to actually understand why Lila and her peers are so passionate about global injustices.

Elsewhere, Evelyn takes a decidedly unhealthy interest in Kyle (Billy Bryk), the humble and generous son of a new shelter resident in whom she sees all the perceived potential her own son lacks. She crosses line after line, projecting her own aspirations onto the young man not for his benefit, but her own, as if trying to prove she bears no blame for Ziggy’s failure to thrive. Moore plays Evelyn with a frenzied, overbearing energy that would terrify any rational person – indeed, the more she interacts with Kyle, the more ill at ease he becomes.

When You Finish Saving the World revels in the uncomfortable, and as such, Eisenberg’s debut might not be everyone’s cup of tea. There’s a genuine bit of tenderness in its conclusion, but the agonizing journey may find viewers leaping off the train before the film arrives at its destination.