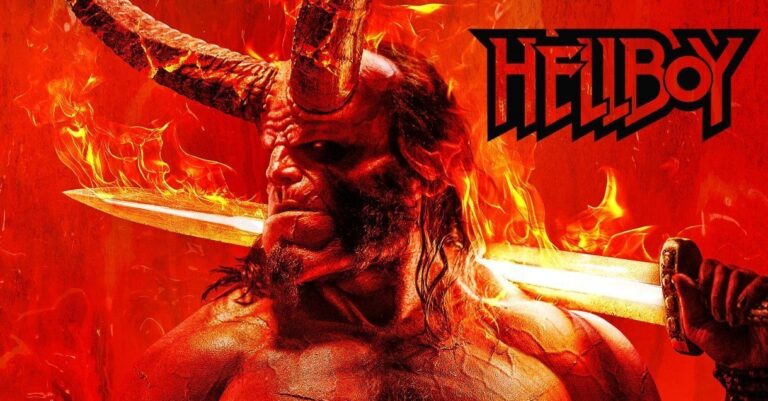 Hellboy is back with another weird tale of the monsterous pulp noir, but not the planned Hellboy 3 from Guillermo del Toro that was long promised. Instead, Big Red is getting the reboot treatment starring Stranger Things actor David Harbour as the wielder of the Right Hand of Doom, this time equipped with an R rating and helmed by Neil Marshall.

If that all sounds to you like a recipe for disaster that poorly attempts to fill the big shoes of Ron Perlman and del Toro’s beloved original films, you’d be (surprisingly) wrong – Hellboy does its own thing and does it unapologetically well. Not only does Harbour settle into the trench coat easily, but Marshall’s horror and fantasy resume including The Descent, Game of Thrones and Westworld convalesce in this new version, inhabited with wonderfully macabre creatures and environments.

Harbour’s Hellboy is a little less cool than his predecessor Perlman’s take, and more spastically angry when we find him here well into his career at the B.P.R.D., but the actor has the character’s gruff, sarcastic charm down. His adopted father Professor Broom (Ian McShane) has been sending him on global missions for years and the film has a neat fantasy international spy vibe as it hops from one exotic location to the next.

Before anyone gets too excited with all this praise, let’s temper your expectations a bit by saying the film is full of problems – first and foremost the generic overall plot. The “ancient evil arises, tempts the hero and then they fight” story arc didn’t hold the interest of this comic book lover, who is prone to forgive these tropes, even with Milla Jovovich clearly having fun as the aforementioned ancient evil, Nimue.

But other comic book fans will appreciate that this version is a closer representation of Mike Mignola’s Dark Horse Comics source material, although still no live action version has yet to feel close enough to be deemed a truly faithful adaptation. The fantastic but all too short inclusion of Thomas Hayden Church as Lobster Johnson will also surely make comic fans grin from ear to ear.

Hellboy’s sidekicks are also nothing to write home about this time around, with both doing very little to help shoulder the weight off Harbour’s broad red shoulders. The character of B.P.R.D.’s soldier with a monstrous secret, Major Ben Daimio (LOST‘s Daniel Dae Kim), is borderline terrible most of the film while Hellboy’s old friend Alice (Sasha Lane), with her own expositional secrets, is quite likable but also quite forgettable.

Hellboy is at its best when smashing along at a frenetic pace that only slows down for a small portion near the climax of the film. There are plenty of terrific sequences that show Marshall has an eye for fantasy action, including a standout brawl between Hellboy and three literal giants that shows the true potential of this new cinematic version.

The creatures really are the stars of the film, along with the R rating that allows the filmmakers to unleash mayhem, including some hilariously gory moments. Whether Hellboy is confronting the hideous Baba Yaga (terrifyingly brought to life by Troy James and Emma Tate) in her creepily realized moving house or a well timed F-bomb from the pig-faced lackey Gruagach (Stephen Graham), there’s an undeniable spark of Hellfire to the film.

The world created for this version of Hellboy feels dangerous, lived-in and ripe for more exploration into its weird, wild inhabitants, including something exciting for fans teased in the final shot. If audiences can let go of the beloved previous films and watch this new version with an open mind, this new Hellboy has a fair amount of messy over-the-top fun to offer, despite its shortcomings.