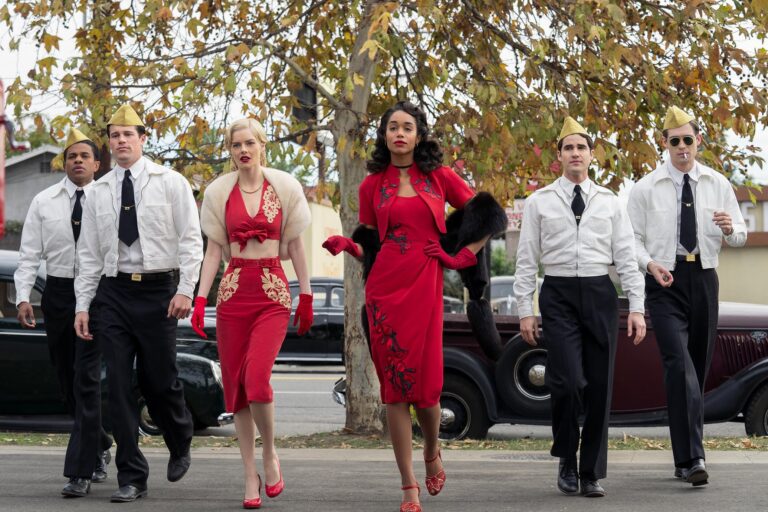 Stuffed to the gills with great performances and spectacular production design, Ryan Murphy’s Hollywood — arriving on Netflix this weekend — posits a version of post-war Tinseltown where racism and homophobia weren’t towering obstacles that would require decades to overcome, but rather mild inconveniences that could be vanquished with a bit of good ol’ perseverance. Would that the Golden Age actually functioned in this manner, because it’s a delightful notion, but in that regard Murphy’s latest project is more fairytale than fact.

We first meet Jack Castello (David Corenswet) in a crowd of would-be extra — “swarming like so many locusts,” as the opening voiceover tells us — outside the gates of Ace Studios. A war veteran with a pregnant wife, Jack shows up here each morning hoping his good looks will be a gateway to stardom, but when he finally gets the attention of a casting director, the news isn’t great. “Pretty face but no training?” she asks. “Kid, you’re a dime a dozen.” The disappointment leads Jack to a local watering hole, where he meets Ernie (Dylan McDermott), a service station proprietor with a staff of hunky young men and a very different idea of what “service” actually means.

Indeed, at the cheekily named Golden Tip, the phrase “fill her up” has a completely different connotation, and soon Jack is providing Ernie’s brand of service to a range of clientele, including Avis Amberg (Patti LuPone), the wife of a powerful studio head (Rob Reiner). “Take care of mama and she’ll take care of you,” Avis croons, and as Jack stares up at the Oscar statues on the mantel while thrusting away, he can’t keep from smiling.

But Jack’s journey is also the gateway through which we meet the rest of our key players, including fellow service station employee Archie Coleman (Jeremy Pope), a gay black screenwriter whose latest script has garnered the attention of Raymond Ainsley (Darren Criss), an aspiring director of Filipino descent; Raymond’s girlfriend Camille (Laura Harrier), a talented black actress frustrated that her only opportunities are demeaning stereotypes; and Roy Fitzgerald (Jack Picking), a handsome, soft-spoken farm boy whom predatory agent Henry Willson (a sinister Jim Parsons) will rechristen Rock Hudson.

Murphy’s Hollywood isn’t shy in its depictions of power dynamics: Willson frequently uses his influence to provide Roy with career opportunities in exchange for sexual favors, and when Jack refuses similar advances, Willson threatens to ruin his chances of ever becoming a star. It also explores the racist gatekeeping of the times: when inquiring about testing for a character in a new picture, a studio executive tells Camille “that’s a white role, honey.” Hollywood takes particular interest in the real-life story of Anna May Wong (Michelle Krusiec), an Asian actress passed over for the leading role of a Chinese villager in The Good Earth. The role eventually went to European actress Luise Rainer and resulted in an Oscar win, marking one of the most notorious examples of race discrimination in the film industry, and although Murphy’s series conjures up a redemption story for its fictionalized version of Wong, it ultimately rings hollow in its implausibility.

Likewise, the meteoric rise of Hollywood‘s central characters and the speed with which they enact change — not just upon Tinseltown — is too far-fetched to be authentic. 70 years after the events depicted here, Hollywood’s lack of diversity is still an issue, so it’s difficult to buy the notion of an ultra-progressive studio head greenlighting a project of this sort in the 1940s. But in Murphy’s world, all it takes is a little push, and the result is that “racial protests across the country simply melted away” in the wake of a single film release. It’s so far removed from reality that it’s almost laughable, but it certainly makes for a feel-good fairytale story.

As mentioned above, the performances are the highlight of Hollywood, with Jeremy Pope and Jake Picking emerging as particular standouts, and it’s fascinating to watch Jim Parsons shed his nerdy Big Bang Theory persona to become the manipulative sharp-tongued “star maker” with an appetite for handsome young men. Joe Mantello also shines in a pivotal role as a producer, Holland Taylor is marvelous as Ace Studios’ resident acting coach, and Samara Weaving does solid work as another aspiring actress, trying to make it on her own merit rather than trade on the value of her family name.