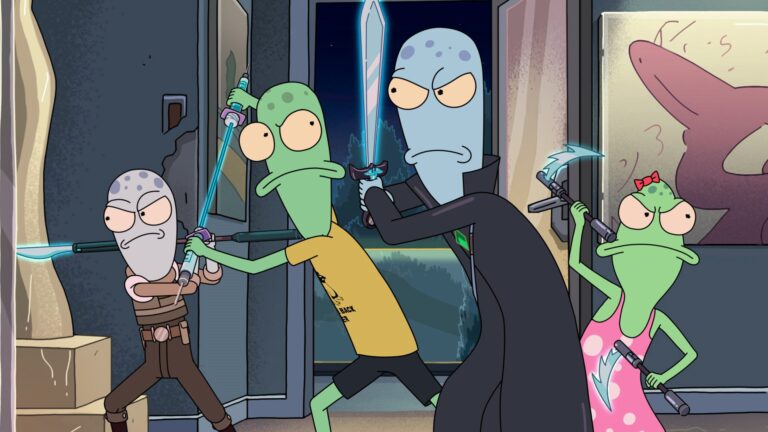 Hulu is about to get extra weird. Four aliens have escaped their exploding planet and crash landed into a move-in ready suburban house — time to blend in and wait for their super computer Pupa to evolve and destroy everything because… that’s the mission! Welcome to the new animated series Solar Opposites. Something this bizarre can only come from our pals Justin Roiland (co-creator of Rick & Morty) and Mike McMahan (former head writer of Rick & Morty) taking their humor to the uncensored streaming realm.

First off, let’s address the elephant in the room: yes, Solar Opposites looks and sounds just like Rick & Morty and obviously everyone will compare the two shows, so this review isn’t going to pretend like the other show doesn’t exist: it does, and they are similar. Turns out this isn’t a problem, because Solar Opposites is damn funny in its own right and also exists as a perfect companion show to Rick & Morty — much the same way American Dad and Family Guy co-exist, share voice actors and animation styles, all while making the funny in different ways.

Roiland, who does numerous voices for Rick & Morty (including the lead duo themselves), provides his one-of-a-kind delivery to co-lead character Korvo on Solar Opposites. Korvo is, in many ways, an alien Rick Sanchez fill-in with a general disdain for other beings and usually the smartest one around. Roiland’s dry and many times obviously improvised delivery is still killer, providing laughs from lines or situations that normally wouldn’t be inherently humorous. A perfect example are the episode intros, ending with a hilarious improv-style rant from Korvo about a random, trivial Earth thing that drives him nuts.

Getting to know the rest of the main cast is more interesting since they aren’t direct amalgams of characters from Rick & Morty. Thomas Middleditch (Silicon Valley) plays up the energy as the more optimistic foil and peer to Korvo with his ironic t-shirts and generally more Earth-loving, sunny disposition. Similarly, the younger sibling-esque aliens Yumyulack (The Goldberg‘s Sean Giambrone) and Jesse (Mary Mack) also share a dynamic of positive and negative, but in a dangerously more naive way. These two have some hilarious adventures on their own away from Korvo and Terry that really help keep the overall laughs-per-minute running high.

Being bonkers weird is this show’s bread and butter, and Solar Opposites revels in digging deep into sci-fi tomfoolery. A B-plot involving a society of humans Yumyulack randomly shrinks to collect into his wall menagerie goes off the rails in a great way as the season progresses. We don’t want to spoil anything, but viewers will be talking about where it goes. Lastly, the adorably odd and mostly non-speaking Pupa, a small yellow blob-like super computer, will one day evolve into its true form, consume everyone (aliens included) and terraform the Earth — which also begins to go to unexpectedly weird and funny places later in the season.

Solar Opposites is definitely aimed at a certain demographic of streaming, and if Roiland and McMahan’s other animated series isn’t your jam, then you might want to pass on this one. Those who have craved a Rick and Morty fix (albeit not quite as brilliant) and want their animated shows to be weird, clever and deeply sci-fi will burn through these episodes and then burn through them again because they’re just legitimately funny.