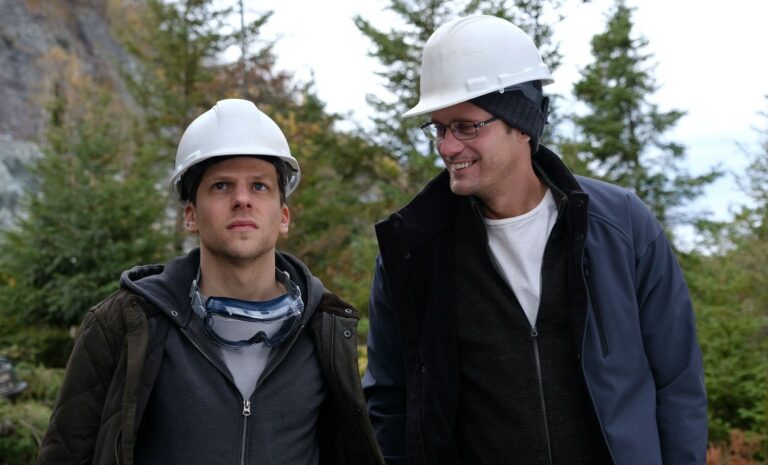 Making an engaging film about the mundane details of Wall Street trading is no easy feat. Adam McKay managed to pull it off with 2015’s The Big Short, mashing up genres and leveraging a variety of filmmaking techniques to spin the financial world into something we hadn’t seen before. Writer-director Kim Nguyen’s The Hummingbird Project opts for the more traditional and straightforward approach, a choice that proves to be to its detriment.

Jesse Eisenberg stars as Vincent, a frustrated trader with a grand scheme to dig a four-inch tunnel from Kansas to New Jersey, installing a fiber-optic line that will provide access to the financial markets one millisecond faster than the competition. A single millisecond may not seem like much of an advantage — one character explains this as the equivalent of “a single beat of a hummingbird’s wings,” which is presumably where the film gets its title — but this kind of speed could equate to hundreds of millions of dollars.

As Vincent explains to his newly hired contractor, Mark (Michael Mando, excellent as always), completing the line will position Vincent as David, “walking onto the floor of the New York stock exchange with the biggest slingshot ever and bringing Goliath to his fucking knees.” There’s just one problem: despite weeks cooped up in a hotel room writing algorithms, his savant-like cousin Anton (a slumped, balding, nigh unrecognizable Alexander Skarsgård) hasn’t been able to crack the code and deliver the speeds they’ve promised to investors.

Further complicating matters are a series of setbacks with the dig itself, including a catastrophic equipment failure, an Amish community who doesn’t want the tunnel passing through their land, and the interference of Vincent and Anton’s former boss, Eva Torres (Salma Hayek, clearly relishing the opportunity to play such a cartoonish villain). Through it all, Vincent finds himself struggling with a medical condition, while the anxious, bathrobe-clad Anton flirts with a nervous breakdown.

One of the biggest issues facing The Hummingbird Project is that its core premise is neither cinematic nor particularly interesting. Far too much of the film is spent on the logistics of drilling through mountains and under rivers, negotiating with labor crews, and acquiring the necessary land to complete the project — all of which is about as thrilling as watching paint dry. There are flashes of brilliance, such as a chance encounter with a waitress that forces Anton to reckon with the fact that years of his life will have been given up in service of an idea that won’t make the world a better place, but these moments are too few and far between.

Likewise, with the notable exception of Mando’s drill expert, none of the characters are particularly pleasant to spend time with. Neurotic and controlling, Vincent is basically just another asshole trying to get rich, with little regard for the psychological toll the project is clearly taking on his cousin. Nguyen tries repeatedly to paint Anton as the film’s most sympathetic character, but this feels incongruous with Anton’s poor decision making, including the continued neglect of his wife and daughters and the refusal to heed Eva’s warnings about the consequences he’ll face if he repurposes any of the code he originally wrote for her.

The final act of The Hummingbird Project includes a mea culpa of sorts, but one that feels entirely unearned. That these characters would devote so much time, energy and money into achieving a goal only to turn on a dime and completely rethink their entire worldview just doesn’t hold water, and leaves the entire experience feeling rather pointless.