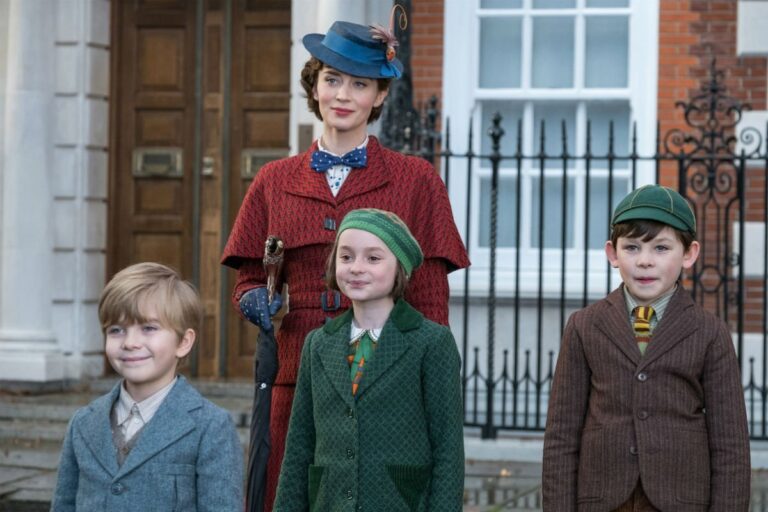 Taking a break from its ongoing quest to update each of its classic animated films into live-action/CG hybrids, Walt Disney Studios dusts off another iconic character with Mary Poppins Returns, a sequel to the beloved 1954 musical about a magical nanny and the children she looks after. Hitting Blu-ray this week complete with gorgeous costumes, lavish sets and a host of new songs, this follow-up should be received with immense delight by Disney fans.

Taking place some twenty years after the events of the original, Mary Poppins Returns finds the Banks children all grown up: Jane (Emily Mortimer) is a labor organizer, while Michael (Ben Whishaw) is a widower with three children of his own, teetering on the edge of bankruptcy and in danger of losing the family home on Cherry Tree Lane if he’s unable to pay back a loan he took out in the wake of his wife’s death. As Michael and Jane search desperately for proof of the bank shares left to them by their father, Mary Poppins (Emily Blunt) strolls back into their lives, announcing matter-of-factly that she’s returned to care for the Banks children.

“We’re on the brink of an adventure,” she declares shortly after her arrival, just before an afternoon bath for the children turns into a wondrous voyage beneath the ocean with all manner of sea creatures. It’s just the sort of whimsical expedition that one might expect from this particular caregiver, but pales in comparison to the film’s best scene, a gorgeous and stunning blend of live-action and hand-drawn elements that serves as a tribute to the dancing penguin sequence from the original film. Featuring anthropomorphized animals in tuxedoes, bowler hats and evening gowns all rendered in the classic Disney style, along with a thoroughly enjoyable song-and-dance number by Blunt and Hamilton mastermind Lin-Manuel Miranda (not to mention some familiar arctic birds), it’s one of the most enthralling cinematic moments of the year.

Speaking of Miranda, his role as a friendly lamplighter (or “leerie”) named Jack is a clear correlation to Dick Van Dyke’s character of Bert from the original film (although Jack’s occupation remains the same throughout the adventure), and his spotty affectation of an English accent doesn’t fare much better than Van Dyke’s. This is easy to overlook, however, thanks to Miranda’s exuberant and energetic performance – it’s clear he’s having the absolute time of his life here, showcasing his Broadway-bred chops on elaborate numbers like “Trip a Little Light Fantastic” and the sweetly sentimental “Lovely London Sky,” the latter of which bookends the film.

The supporting cast is something of a mixed bag: Julie Christie sparkles as a sharp-tongued housekeeper, Meryl Streep hams it up as an eccentric cousin of our heroine, and Colin Firth schemes as a corrupt and conniving bank manager, a bad guy just for the sake of being bad. Mortimer is solid in a mostly underwritten role as Jane, the three young performers portraying the Banks children are wonderful, and Whishaw stands head and shoulders above the rest as the grieving Michael. So far removed from the happiness of his youth that he’s convinced himself the magical childhood of his memories was fabricated, he reprimands Mary Poppins for “filling the children’s heads with stuff and nonsense,” and our hearts break a little.

It’s nearly impossible to ignore the shadow cast by Julie Andrews in one of cinema’s most recognizable roles, but Blunt is more than up to the task of filling those shoes in a note-perfect performance that’s (thankfully) more homage than imitation. Drawing more from the novels on which the original film was based, Blunt’s version of Poppins is perhaps a bit more stern, certainly more acerbic, and arguably a bit more bizarre than Andrews’ portrayal, yet Blunt always seems to have a smile dancing at the corners of her mouth, even when admonishing the children – or in some cases, the adults. In short, Mary Poppins Returns is wonderful, the stuff of true Disney magic, and not to be missed.

As with any Disney home video release, this Blu-ray set arrives with a pristine audio and video transfer. The bonus materials are plentiful, including in-depth examinations of several musical numbers (“The Royal Doulton Music Hall” sequence is particularly of note), a blooper reel, and a touching homage to the returning Dick Van Dyke.

Mary Poppins Returns is now available on Blu-ray. Click this link to purchase from Amazon.