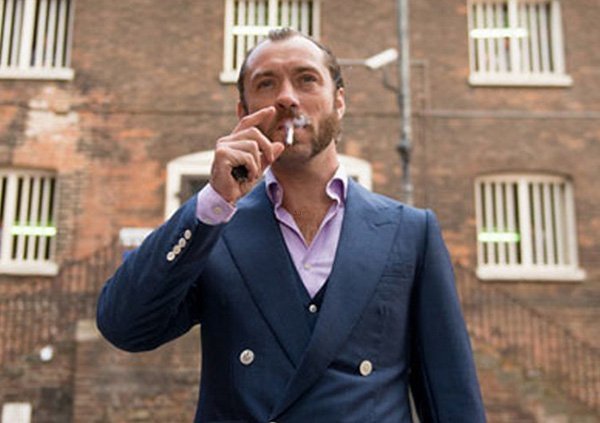 Writer and director Richard Shepard, best known for his films The Matador and The Hunting Party, is returning to theater screens with Dom Hemingway. Featuring Jude Law in a bombastic role that must be seen to believe, the film recently opened in limited release, and I was fortunate enough to speak with Richard via telephone about his experience putting the film together, as well as working on HBO’s Girls.

The character of Dom feels like a mix between Ben Kingsley’s character in Sexy Beast and Jude Law’s Alfie, in a good way. If that makes any sense.

[laughs] Yeah, I mean, the inspiration for Dom Hemingway the movie came from Dom Hemingway the man, who I just started creating, and he seemed like he’d be an interesting man to spend some time with. As I was writing it, I started seeing the movie that was in front of him and he’s sort of an outrageously big character with a beating heart underneath it all. I was interested in exploring that.

How did Jude Law end up getting on board? Did you have him in mind initially, or did he come to you?

I didn’t have him in mind initially. When I finished the script and was starting to put a casting list together, I sort of wanted to hire an actor who hadn’t played a gangster before. That cut out half the actors in London. I wanted someone who had also done some Shakespeare, because while I knew that Dom wasn’t Shakespeare, he was someone who had a lot of monologues and who was very verbose, and he had a way of doing it and had that sort of rhythm to it.

Jude’s name sort of came up and that sounded like an exciting idea, because he hadn’t really played a part like this at all. We got to him and thankfully he sort of saw the opportunity to create something that he’d never done before. I think he saw the humor and the heart of Dom and took it as a challenge.

Is there anything from the original script that didn’t make the movie? Maybe something you wished could be in there?

Well, I had final cut, so ultimately the movie is what the movie is. There are little things like a line here or there that didn’t quite make it because of the pacing of the movie and such. The script was 93 pages and the movie was 93 minutes, it’s basically the script. While we had an enormous amount of fun making the movie and putting the movie together, ultimately anything that didn’t make the movie didn’t make it for a reason. I don’t really look backwards on it. Sometimes you hear that they took out twenty minutes of the movie because it was too long, but that wasn’t the case. Almost every single thing we shot ended up in the film.

Emilia Clarke had kind of a smaller role in the film, and she’s so huge in the limelight right now with Game of Thrones. Did you have to work around her schedule at all or was she completely on board and ready to go?

Yeah, she came and auditioned. I barely recognized her from Game of Thrones because she wears a blond wig in Game of Thrones and for whatever reason appears to be much bigger in stature, but in real life she’s tiny and has dark hair. She was amazing. She actually auditioned with Jude and we both thought she’d be great in the role and she is. She’s sort of Dom’s Kryptonite. She breaks his heart and while she doesn’t have a huge amount of screen time, she has a huge presence throughout the movie. She also has such a beautiful voice and got to sing that Waterboys song that I really loved. That was really a gas.

You’ve done quite a bit of TV work, including a few episodes of HBO’s Girls. Do you prefer working on film more than television?

I think that I’m very lucky that I get to toggle between both film and television. My movies don’t cost a lot of money to make, and one way that I can sort of afford to even do them is to be working in television and paying my rent that way. Also, I really like directing television and doing a show like Girls. It takes a while to get a movie made and set up so it’s good to be working and practicing my craft. If you can be doing it on something as cool as Girls, it’s pretty great.

That work kind of formed Dom Hemingway. I had just directed some episodes of Girls right before I went to London and I was in a very good place, in terms of not feeling rusty and being ready to shoot. Getting excited about it, you know. I feel lucky that I get to work in both mediums. There’s such great work being done in television now, it’s such a nice thing. I feel it helps my TV work that I make features, and it helps my movie work that I’m working all the time in television.

I actually read a quote from you on IMDB that while you love a big budget film, you much prefer having a lot of control over the creative process. Is there anything intellectual property wise out there that could convince you to do something on the bigger end?

You know, the fact of the matter is that there are some directors who are suited to do those giant movies, and while I have some interest in that on some level, I’m very lucky that I can write and direct my own movies and I’d like to continue to do that. It’s not that I don’t like a big Hollywood blockbuster, but the priorities in those tend to be slightly different than mine. I prefer to push things further to the edge than something can be in a bigger budget movie.

Frankly, I get to wear different hats. I just directed the pilot for this new television show Salem, a horror show. It’s a huge production. We built this incredible set and that was like big budget filmmaking on a television scale, and nothing like I’ve ever done. I was able to experience both worlds. In terms of my movies, I feel like as long as people continue to let me make my movies, I’m going to continue to do that. I’d rather do my own stuff than do someone else’s. I do enough of that on television, where I’m definitely working for someone else.

Aside from Salem, do you have anything else coming down the pipeline you want our readers to know about?

I have a few more episodes of Girls this summer, which will be during the fourth season. Making Dom was an amazing experience. Getting to work with Jude Law, making the movie, promoting it, it’s been a huge part of my life for the last two years and I’ve completely enjoyed it. I’m excited to start writing a new movie, which I’ve already started writing, and I continue to be amazed that I can do this for a living.