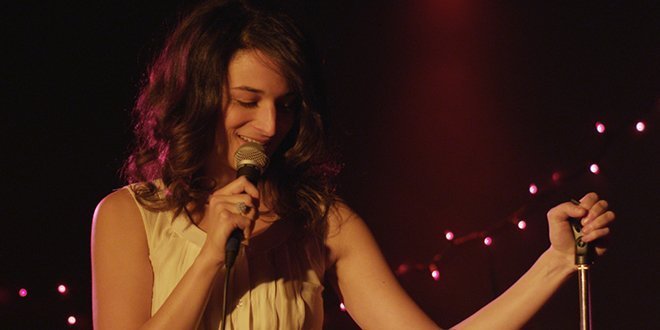 If you don’t remember Jenny Slate from her infamous dropping of the F-bomb during her first Saturday Night Live telecast, that’s alright – a person shouldn’t be defined by a single event that occurred in their life. In fact, this philosophy rings true in Slate’s portrayal of aspiring stand-up comedian Donna in Obvious Child, a Sundance favorite that deals with the subject of unexpected pregnancy and abortion in a way that no other film has ever dared – with warmth, authenticity, and plenty of laughs.

With Obvious Child opening in limited release this weekend, Slate and writer/director Gillian Robespierre have been traveling the country to raise awareness for the film. During a recent stop in Phoenix for a screening and Q&A session, we managed to steal a few minutes to chat with this pair of talented ladies. Here are some of the highlights.

On selling the film:

Gillian: We were one of the lucky movies that sold at Sundance in the first week. We went in with normal-to-low expectations, we were just really excited to be in the festival. Then one night I was up til five in the morning, negotiating in the WME house with A24. It’s a strange thing. We worked really hard and we’re very proud of the movie, but you never know how people are going to bond to it – or maybe they won’t accept it or connect to it. But it feels like so far people are excited about it, and there’s been a lot of connection. People really, really wanted to be part of the team.

On approaching the subject matter from a female perspective:

Jenny: I think there are a lot of aspects to our movie that are new, or stick out as not having been done before. The story, to us, is modern and natural. I don’t think we’re trying to push anyone’s buttons. We understand some of the situations haven’t been delved into before in the romantic comedy genre, but we’re not trying for anything, except to make a good movie that’s thoughtful and funny and satisfying to us.

On reactions to the film:

Jenny: I don’t think we knew what to expect. We made the movie because we had the instinct to do so, and I think that’s good, that we weren’t trying to figure out what the audience would be or what the reactions would be. I think the most surprising thing has been all the different people coming up to us after the screenings, male or female, and sharing their stories with us. We connect to this story, and we feel like it’s a modern story, and that’s why it’s important to tell. It’s a story that a lot of people can relate to, but hasn’t really found its place in this rom-com genre. That connection is there for us, but to have it with other people is really this wonderful affirmation, and it adds another level to this work that is really gratifying.

On backlash from anti-abortion activists:

Gillian: I’m welcoming the conversation from both sides, but I don’t know if the other side will ever see this movie. They’ll just go off the trailer or what journalists have to say, and that’s a real shame. “Romantic comedy” and “abortion” aren’t words that really describe what we made.

Jenny: I would say that Gillian and I are both feminists, and we seek a world where there’s equality between the sexes, and we think that every woman should have the right to choose, but in no way is our movie saying this is what you need to do or this is what you need to feel. Our movie is saying, here is one person and her complex, and hopefully fresh modern story. We hope for a conversation that’s not just us and the people that we know and agree with, but people of many different perspectives that can actually have a useful conversation about how we can all live nice lives together and treat each other well.

On advice for aspiring filmmakers:

Gillian: Making movies is really difficult, and getting to the point we got to is really exciting because of all the hard we put in, but it’s also not something that everyone gets the opportunity to do. My advice is to tell stories that ring true to you, that you want to tell, and keep your voice intact. Don’t ask for permission to tell your story, just tell it.

Obvious Child is currently playing in limited release. Check your local listings for showtimes and availability.