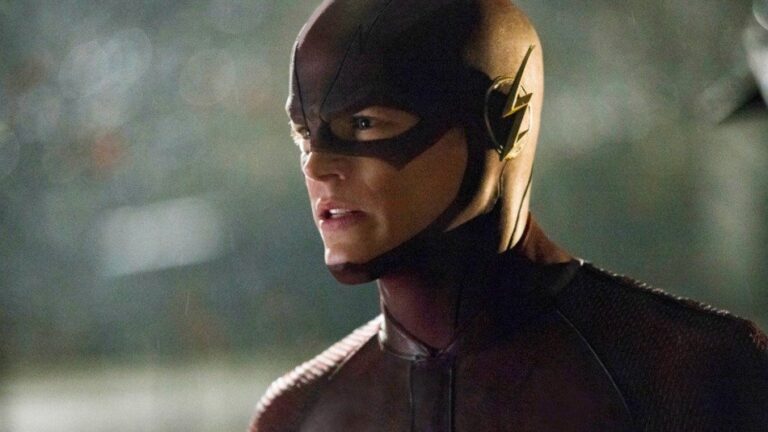 Grant Gustin is the star of the most highly anticipated new show in the nerd community this fall, with The Flash on CW. Gustin is the real deal, and after having seen the pilot episode multiple times, I can honestly say he delivers a great take on Barry Allen.

Warner Bros. TV invited us into their press room at Comic-Con, and after taking a moment to show off our Superman gear to each other, Gustin told us what it’s like to be “The Fastest Man Alive.” You can watch the video below as well as read the highlights, and be sure to keep coming back to NerdRep.com for more from The Flash in the coming weeks, including interviews with stars Danielle Panabaker, Tom Cavanaugh, Jesse L. Martin and Candice Patton.

On seeing the completed special effects for the first time:

“[It was] really cool. When you’re shooting that kind of stuff on the day, you’re not really that sure what it’s going to look like. Especially for the pilot, I had no idea what to expect.

Now I kind of know when we’re shooting. We’re on episode 3 now, when we’re doing things I kind of know what’s going on. But yeah, the first time I saw it – it was really just raw in a way. It doesn’t look too polished or cheesy. It’s just really cool. It blew my mind. It was better than I expected and I was expecting a lot.”

On having the 90’s Flash, John Wesley Shipp, play his father:

“Did you know we’re both from Northern Virginia? Our birthdays are like days apart. There’s just a lot of weird, humorous things going on there. And he’s just the nicest actor. I mean, our scene together in the pilot was my favorite to shoot. So I love having him.”

On transitioning from musical theater to effects-driven television:

“I grew up doing musical theater, but also obsessed with action figures and I would do frame-by-frame things as a kid. I had a really weird, strange  imagination. So this is kind of translating to that now with the green screen stuff. All you can use is your imagination when nothing is happening around you. You just kind of have to accept that you’re pretending to be the fastest man alive.

But the transition out of theater to TV was kind of easy and nice for me because Glee was my first TV job. I went from doing the Broadway tour of West Side Story on a Thursday night or Friday night, to shooting Monday morning on Glee, and it was kind of overwhelming, but it was I think the easiest possible to transition to TV that I could have had because of the nature of my training.”

On his workout routine for The Flash:

“Yeah, I didn’t really have a workout routine on Glee. I’ve always been pretty active. I look like a runner, so it’s not hard for me to maintain this body type. I’m just lifting some weights when I can just to keep on as much size as I can with the shooting schedule we have.

It’s pretty easy for me to stay lean… and kind of cut-up [laughs]. Just training in the mornings when I can before I shoot. Nothing like what Stephen [Amell] does for Arrow. He’s insane. “

The Flash will premiere on Tuesday, October 7, exclusively on The CW.