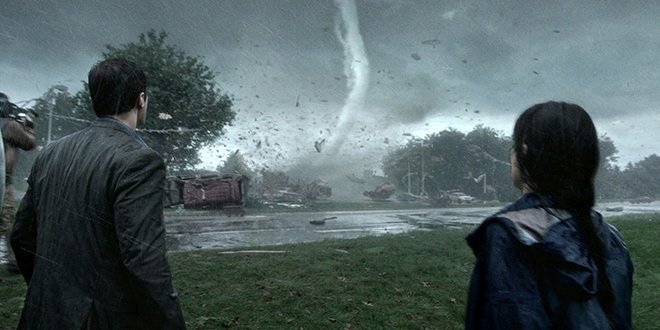 I’m a huge fan of disaster films. Ever since my eyes fell upon the screen during Independence Day, the genre has been a huge guilty pleasure for me. They’re big, they’re dumb, they’re poorly written, the characters are only there to react to the hell going on around them, and the actors usually aren’t given much to work with, and it shows. Into the Storm, a film by director Steven Quale, isn’t anything different. It opens with the tornado death of a group of teenagers and ends with one of the worst finales I’ve ever seen in a movie. In between those things is a spectacular barrage of sound and sight mixed with horrendous acting and even worse dialogue.

The cast includes Sarah Wayne Callies, who you probably know better as Lori from The Walking Dead, along with Richard Armitage (Thorin Oakenshield from the Hobbit trilogy) and Matt Walsh (that guy in random comedies who you can never remember what he’s been in before but by god you know you’ve seen him in things). They did their best job with the script they were given, but unlike the debris being strewn around onscreen, everything fell flat. They were outstanding when it came to running and screaming during the scenes with the funnel-y death clouds, but the writing was so terrible during other parts that they could’ve given the movie to phenomenal A-listers and it still would have sucked.

The movie also fell apart tonally. In one scene you have three awful redneck characters trying to recreate Jackass in the storms with what could be a Benny Hill remix in the background, and it’s immediately followed by the immolation death of a main character and the emotional fallout for his friends. It’s a complete mess.

But the tornadoes are impressive, and the effects department of this film should be commended. Having been close to a few tornadoes personally, I can say the usage of bass and the mixing of sound made the twisters feel real on the screen. Unlike the movie Twister, the tornadoes didn’t seem to have an otherworldly evil to them. They were just there, and they were there to fuck up the cast’s day.

So, humble reader, should you go spend your money on Into the Storm? Seeing this in theaters, I feel, is the only way to go, but only if you really have a hard-on for disaster flicks. The big-screen experience will certainly help with the special effects – hell, it’s probably not even watchable at home – but I wouldn’t recommend this for anyone that doesn’t love ridiculous mayhem and destruction.