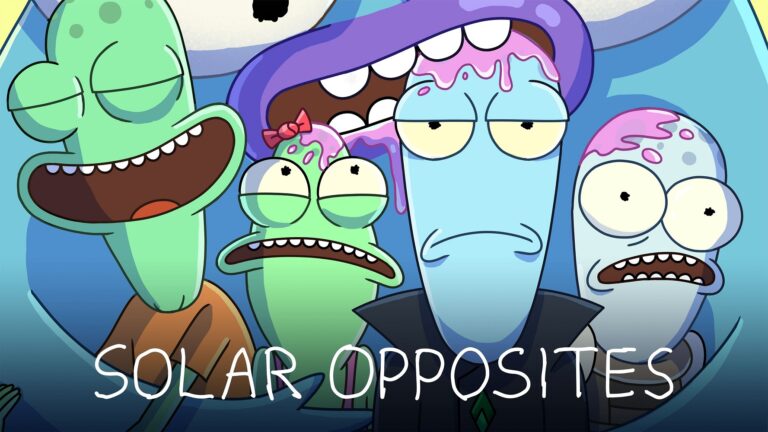 Earth. It’s a horrible home. People are stupid. But hey, we’ve got Solar Opposites Season 3 releasing in full July 12th only on Hulu. To celebrate, The Lamplight Review got to chat with lead voice actors Thomas Middleditch (Terry), Sean Giambrone (Yumyulack), and Mary Mack (Jesse) to discuss what this awful planet has in store for our aliens this season.

PS: Check back later this week for a bonus interview with Solar Opposites EPs Mike McMahan and Josh Bycel. [the interview is now up]

Sean, how many pop culture references have to be explained to you since many of them are from before you were even born?

Sean Giambrone: [laughs] I’ve always liked movies, I watch a lot of different eras of movies. Some of [the references] I pick up. But yeah, there are a couple of them I have to research. Season 3, The Scholastic [Books] stuff and Beyblade are all things from my childhood, so it was very cool to see that in a whole new light. But there are definitely certain parts where I have no idea what’s going on.

Thomas, Season 3 shows a more oddly sweet (although still psychotic) and loving relationship between Korvo and Terry. What was it like bringing that to life?

Thomas Middleditch: It was great. What a funny surprise. What I like about it is that it’s undefined in a way. You can just sort of say because they’re aliens, that’s Shlorpian behavior, that’s what two co-workers do when they express love — they kiss and hug, make sweetness. Make-a-da-sweet. It certainly makes for a slightly awkward experience in the booth. Making kisses noises and just waiting for Justin [Roiland] to do his thing [as Korvo]. He has to come in second, so he has to do his voices off me.

Mary Mack: [to Thomas] Would you prefer it if you were doing those scenes together in the booth or would you guys crack up the whole time and not be able to do it?

Thomas Middleditch: It would be funny. It would also be a real treat just to get that close to Justin.

Mary, a standout episode of Season 3 has Jesse falling in love with the back of someone’s head while waiting in a long line. For me it felt like a character defining episode, but when was that moment for you?

Mary Mack: [laughs] Boy. For me to know who Jesse was, was actually the first audition to do it. These guys [Thomas and Sean] probably didn’t need to audition to get their parts, but I had to audition against the best children in Hollywood. [laughs]

So, um, my audition lines were so good — it was the scene where [Jesse] had the ketchup, from Season 1, where she’s trying to be nice to these people and it immediately turns and she kills these little miniature people or drowns them in ketchup or whatever it was. But that was what it took!

So my job, what I try to do, is come in really positive and try to see the world through Jesse’s rose-colored glasses, I guess? And I want to be one of the popular kids, but I’m going to do something wrong pretty fast or Yumyulack is going to guide me down the wrong track pretty quickly. So right from the beginning, I think she was kind of obvious. Maybe I better put more depth into my acting…

Mary Mack: Yeah, and she yells a lot. She yells and I try not to let her voice go too high, but oof, it’s tough! [laughs]

There’s a J.K. Rowling joke in the first episode that references itself as being part of a script that was written in 2009. Could the process from writing a script for the show to you all recording your voices possibly take that long?

Thomas Middleditch: Maybe for Justin, I know he’s been trying to get this show going for quite some time? For us, we’ll probably get a script that week and go into the booth and we’re there for a few hours doing not only that script but a few pieces from other things and then we don’t see the episode for, like, a year.

Cool. So I’ve just been asking you about and referring to things you all haven’t seen yet. [laughs]

Thomas Middleditch: I was like, animatronics? Cool, they’ve got robots in there? This going to be wild.

I thought I somehow missed the animatronics episode from this season.

Solar Opposites loves to poke fun at celebrities and Season 3 takes aim at Sylvester Stallone, Joker director Todd Phillips, and many others. Has there ever been a joke for any of you all that would make it uncomfortable if you crossed paths with the subject matter in real life?

Thomas Middleditch: There’s been some jokes about people I know. There’s some jokes about friends of mine. [laughs] Luckily, it was in a positive light. So I was like, “Okay, that’s fine. Well, it’s going to be okay.”

Solar Opposites has been in my orbit for more than just Season 3 recently. I’ve been playing Warped Kart Racers for iOS and it features all of your characters and locations from the show. Is there any other medium you’ve wanted to see the show expand?

Mary Mack: For sure, t-shirts.

Thomas Middleditch: Yeah, t-shirts. I think some of Terry’s are available for sale. I would say make a Solar Opposites video game, but Justin’s already making a bunch of video games. He’s got one coming out [editor’s note: here’s the trailer], it’s about aliens. It’s just not these aliens. He loves aliens. The man looooves aliens.

Mary Mack: He does, doesn’t he? What about, are there any stuffed animals? Because wouldn’t a stuffed animal Pupa be so cute? It’d be adorable. It’d be just a lovable bean thing? Oh gosh.

Sean Giambrone: Or even [the Pupa’s] Harry Potter whistle? Might be out there.

Season 3 finally gives some background as to what the other 99 Shlorpian ships have been up to since their planet exploded. Do you all find it more enjoyable to do these mythology heavy episodes or the random tangent episodes like the “waiting in line” episode from this season?

Sean Giambrone: I think the show just kind of fills up, there’s so much lore to it already, but then there’s the mini-lore in The Wall, the pint-sized lore or whatever, but there’s so many questions about Planet Shlorp and Shlorpians that need to be answered, so it’s kind of fun when we get a big explanation episode like that one.

There’s some hinting in that episode and beyond that perhaps Jesse and Yumyulack’s roles in the team/family are supposed to have, shall we say, more going on than what’s been on the surface thus far?

Mary Mack: Yeeaaah. I love that about this show. You can’t put it in a box. You can’t put these people… aliens in a box. We don’t necessarily have the same norms, and that’s what I like about the show… and I’m sticking to it!

Besides the already confirmed Season 4, what’s next for Solar Opposites? A movie? A Rick and Morty crossover?

Thomas Middleditch: Any of those would be fantastic.

Thomas Middleditch: The movie would great. We have to get out there on the big screen for sure.