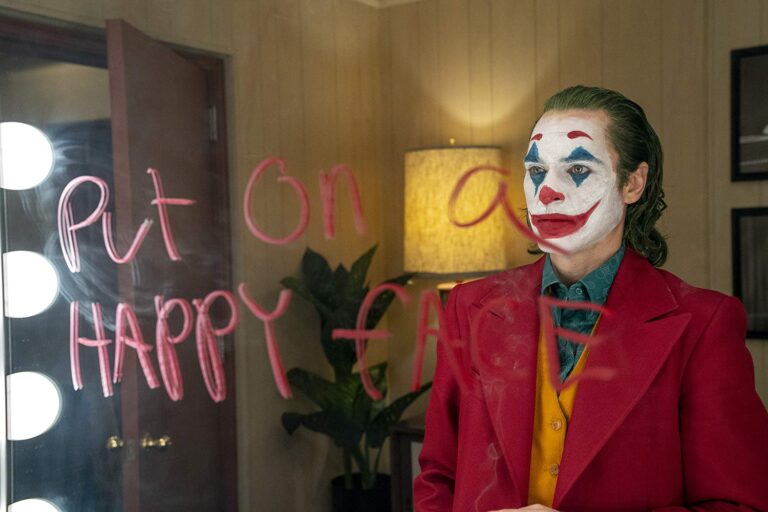 Todd Phillips’ Joker has been courting controversy since its premiere at the Venice Film Festival, where it took home the prestigious Golden Lion award. But while that particular accolade puts the film in the same company as Alfonso Cuarón’s Roma or Guillermo del Toro’s The Shape of Water, the film’s examination of one man’s journey from mental illness to violence has already proven to be far more polarizing than either of those selections, and its theatrical release will likely continue to spark division.

Joaquin Phoenix stars as Arthur Fleck, an emaciated loner who takes care of his frail, elderly mother (Frances Conroy) and works as a clown-for-hire. Arthur pines for the pretty single mother down the hall (Zazie Beetz), dreams of a career in standup comedy and fantasizes about guesting on his favorite late-night show, where he can finally meet his idol, charismatic host Murray Franklin (Robert De Niro, essentially taking over the Jerry Lewis role from The King of Comedy — one of two Martin Scorsese films to which Joker owes a monumental debt).

When we first meet Arthur, he’s carefully applying his clown makeup and using his fingers to contort his face into a smile, even while tears leak from his eyes. He truly enjoys his work, and by his own admission wants to bring joy into the world, but as he tells his over-extended social worker, “all I have are negative thoughts.” Although the nature of Arthur’s mental illness — or the events that landed him in psych lockup — are never expressly revealed, we know he’s on seven different medications, and he’s afflicted with a rare condition that causes him to burst into involuntary fits of laughter at the most inappropriate times, such as when he’s on the verge of being assaulted on a subway train by a trio of Wall Street types.

But the last laugh belongs to Arthur, as the beating finally pushes him beyond his breaking point and he retaliates with a revolver acquired from a fellow performer. Self-defense would be a reasonable claim, had Arthur not chased down one of the fleeing assailants and executed him at point-blank range, and the fact that he feels no remorse whatsoever is the first sign that someone has gone very, very wrong in Arthur’s head. Soon, the tabloid headlines about a killer clown dispatching Gotham’s elite morph into a rallying cry as tensions between the working class and the upper crust finally boil over, and scores of protestors itching for a fight take to the streets clad in clown masks.

Phoenix’s performance has been Joker‘s most buzzed-about element, and for good reason: he’s incredible, even before taking into account the dramatic 50-pound weight loss that left his cheeks sunken and his ribs and spinal column protruding grotesquely from his gaunt frame. Nearly everything about Arthur is meant to make the viewer uncomfortable, and Phoenix utilizes every tool and technique in his repertoire to make sure our skin crawls perpetually over the course of the film’s two-hour runtime.

But to categorize Joker as an origin story for Batman’s most recognizable villain feels disingenuous, as there’s little here that actually resembles the DC Comics character or his many iterations. In fact, most of the references to the comics — such as the inclusion of Thomas Wayne and his family, or the multiple mentions of Arkham Asylum — feel completely unnecessary, and removing them altogether wouldn’t change the narrative in any meaningful way. It’s as if Phillips had a burning desire to create his own version of Taxi Driver, but wasn’t sure audiences would show up, so he slapped a coat of green hair dye and greasepaint onto the screenplay to guarantee plenty of asses in seats.

That’s not to say the film isn’t well-made. On the contrary, cinematographer Lawrence Sher does a spectacular job capturing the grit and grime of Gotham City — all graffiti-covered alleyways and crumbling tenements — and the string-based score from Hildur Guðnadóttir (Chernobyl) is haunting and effective. But the film’s attempts to hold a mirror up to the struggles happening in the real world — protestors are shown brandishing signs with slogans like “Kill the Rich,” and Thomas Wayne is depicted as a fascist Trumpian figure with a seething disdain for the poor — not only come across as half-baked, but also seem to condone graphic violence as a viable solution to societal woes.

Right before putting a bullet in someone’s head, Arthur poses a question: “What do you get when you cross a mentally ill loner with a system that abandons him and treats him like trash?” The answer comes with the pull of the trigger: “You get what you fucking deserve.” In a society where the mentally ill are frequently scapegoated for mass shootings and other heinous acts, to portray violence as the logical conclusion to Arthur’s depression and anger and loneliness feels deeply problematic.

Despite the studio’s PR statement about not intending to hold the character up as a hero, Joker does precisely that. There’s a moment where a bloody Arthur stands atop a police car, surrounded by cheering followers in clown masks, smiling as the city burns in the background. Like Tyler Durden basking in the adulation of his disciples, he feels most alive when creating chaos, but unlike Fight Club‘s protagonist/antagonist, Arthur is never really forced to reckon with his actions. In the end, Arthur gets exactly what he wanted — he wins, but after sitting through this bleak, unsettling and uncomfortable film, it’s the audience that feels like the loser.