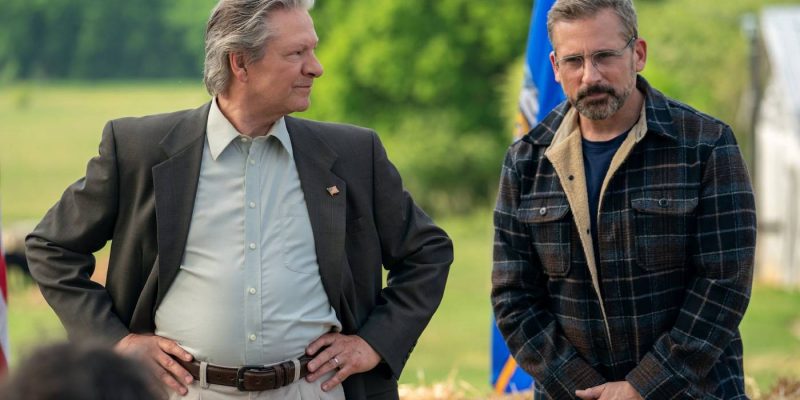 Written and directed by former Daily Show host Jon Stewart, Irresistible turns a playful yarn about a small-town mayoral race into an indictment of the division, distrust and dysfunction of our current political system. When retired US Marine Jack Hastings (Chris Cooper) shows up at a town hall meeting to speak out against his rural Wisconsin town’s adoption of a controversial voter ID law, he never expects to become a viral sensation. But as video footage of his impassioned speech sets the blogosphere ablaze, he catches the attention of Gary Zimmer (Steve Carell), a seasoned political strategist thunderstruck by the notion that someone who looks and sounds like Jack could actually subscribe to a more progressive ideology.

Still smarting from the results of the 2016 election, Gary views Jack as the perfect gateway for the Democratic party to reach a segment of the electorate they’ve long ignored. “This guy makes Joe the Plumber look like Dukakis in mom jeans,” he crows excitedly, before chartering a flight to Jack’s hometown. It’s the kind of place where everyone knows everyone else, and where the arrival of an outsider like Gary quickly becomes the talk of the town — especially when he tries to convince Jack to run against the incumbent mayor (Brent Sexton) in the upcoming election.

Initially, Gary’s long-winded pitch, conducted via a humorous montage where he assists with a series of chores on Jack’s farm, doesn’t have much impact — as Gary himself admits, “guys like me don’t know how to talk to guys like you.” But his earnestness eventually wins Jack over, and he agrees to the proposal, with one condition: Gary must remain in town and run the campaign himself. As Jack starts to build momentum, trouble arrives in the form of Faith Brewster (Rose Byrne), a cutthroat strategist for the Republican party with no qualms about funneling millions of dollars in dark money donations into a small-town election just to stick it to Gary.

Carell’s performance offers little that we haven’t already seen from the veteran comedic actor — if anything, he’s a bit subdued, which allows for Byrne to steal the show. Faith’s shameless regurgitating of party-approved talking points and peddling of blatant falsehoods is more than a bit reminiscent of Kellyanne Conway — a scene where she attempts to paint Gary as the “DC elite” is especially funny — and Byrne seems to revel in her character’s competitive streak, not to mention her affinity for vulgarity.

Irresistible‘s most scathing attack is focused on the scourge of big money in politics — particularly wealthy liberals who pour money into their pet causes and pat themselves on the back for their wokeness, but have never even had a conversation with someone like Jack. In one of the film’s best scenes, the veteran holds nothing back in telling a room full of potential donors at a high-end Manhattan apartment just how ridiculous the entire system is.

Unfortunately, the rest of Irresistible doesn’t even come close to this moment, and as a whole the film lacks any real punch. Sure, Stewart throws jabs at everything from the absurdity of cable news punditry and its obsession with scandal, to contrived, disingenuous photo ops and vicious, misleading attack ads — nothing is safe from scrutiny here, but that scrutiny rarely goes beyond the lowest-hanging fruit. The jokes are painfully obvious, like a press conference where journalists lob softball questions because they already know the answers, and the film’s surface-level satire lacks the bite for which Stewart is typically known. Considering the talented cast assembled here, Irresistible feels more like a missed opportunity than the razor-sharp send-up I was hoping for.