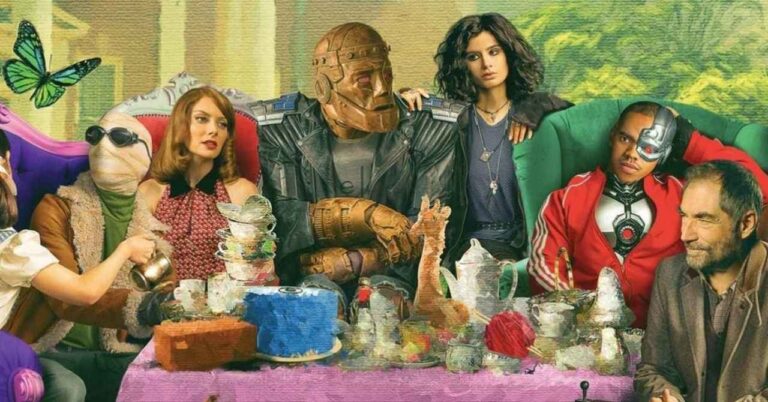 The first three episodes of Season 2, released today on HBO Max and DC Universe, center around that new family member, Dorothy Spinner (Abigail Shapiro), the daughter of Niles Caulder (Timothy Dalton). The tenderhearted, animal-faced young girl was the result of Caulder’s tryst in the wild (seen in Season 1) and much like her mother, Dorothy can create manifestations of her imaginary friends — many of whom are unpredictable, and one of which is a powerful evil worse than any the team have ever faced.

Doom Patrol Season 2 doesn’t miss a beat stepping back into these bizarre, heartfelt adventures with a trio of episodes that continue what made Season 1 so unique: boldly weird characters, ridiculous settings, introspective character development and plenty of “F-bombs.” Shapiro is also excellent as poor Dorothy, taking little time to endear herself to the audience right alongside the team’s growing need to protect her.

The premiere, titled Fun Size Patrol, sees Dorothy living with the shrunken down team in Cliff’s miniature race car town after escaping the painting in last season’s finale. The setting is extremely entertaining to explore as we find that weeks have passed and everyone is starting to go a bit stir crazy as Niles searches for a way back to normal size. Bowlby as Rita is particularly good in scenes with her new mentor Cyborg, as she commits to mastering her powers in an effort to become a true superhero — a big step from the isolationist she was in Season 1.

Episode 2, Tyme Patrol, is the lightest and zaniest of the trio, introducing an adversary that has to be seen to be believed: the clock-faced Doctor Tyme. The whole episode is one ludicrous moment after another and just plain irresistible fun. On top of the Doctor Tyme adventure for Cliff, Jane and Rita, the episode features side tangents for both Larry and Cyborg that take them out of the action, but flesh out these great characters with even more depth, while we see just how desperate a man Caulder can be to protect his daughter.

Lastly, Pain Patrol ends things on a dark, macabre episode introducing DC villain Red Jack, a terrifying inter-dimensional being that feeds on pain and is behind mass killings such as Jack the Ripper. Quickly becoming the show’s MVP, the episode once again keeps Bowlby’s performance as Rita front and center as she teams with Caulder to confront the dark history between himself and Red Jack. Dalton is no slouch either, and his Caulder continues to be just as endearing as he is despicable and that’s thanks largely to Dalton’s tremendous performance.

Doom Patrol really doesn’t have a bad character to complain about in the main cast, and all continue to thrive in Season 2. If there is one nitpick, the narration from Alan Tudyk’s Mr. Nobody is sorely missed thus far this season. But truly, I could spend another 500 words praising Diane Guerrero’s Crazy Jane as she battles her “underground” personalities or Brendan Fraser’s continued role as the emotional core of the series as the tantrum prone Robotman, but really, people just need to stream this for themselves to show HBO Max and DC Universe that not just the critics love this weird, brilliant gem.