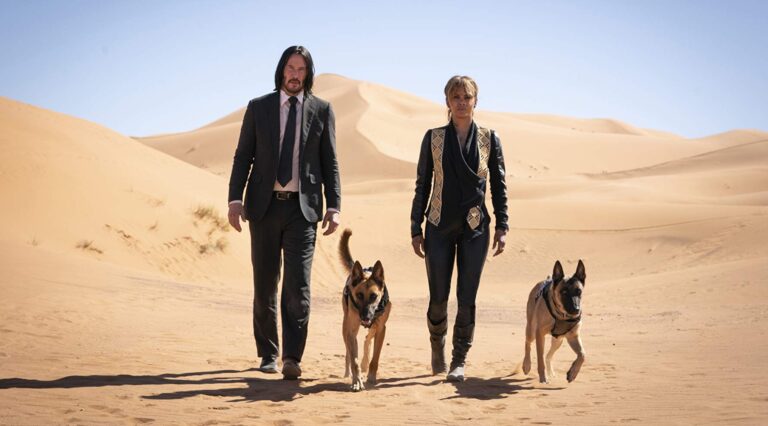 The three key elements of the John Wick franchise are bullets, bloodshed and badassery, a simple yet effective recipe that generated a considerable amount of box office cash, created a rabid fanbase and firmly re-established Keanu Reeves as an action superstar. Opening in theaters next weekend, John Wick: Chapter 3 – Parabellum is operating with the same ingredients and a simple mantra: more.

Much like John Wick: Chapter 2, the third installment picks up moments after the events of its predecessor. Conducting business on the sacred grounds of the Continental Hotel has left John Wick (Reeves) in violation of the stringent rules by which assassins are expected to abide, and Winston (Ian McShane) has ordered him excommunicated. Wick has less than an hour before a contract on his life will be opened, and the handsome sum of $14 million ensures that all manner of killers, murderers and button men will be hot on his trail.

Putting its hero on the run for the majority of the film gives John Wick: Chapter 3 a near-permanent sense of momentum, imbuing each action sequence with a wild kinetic energy. When Wick faces off against an opportunistic colleague in the stacks at the New York Public Library — turning a hardbound book of Russian folktales into a ferociously effective weapon — every punch, kick and throw seems designed to move him closer to his destination. Throughout this opening skirmish, both he and the audience remain mindful of the clock, counting down the minutes before the danger truly begins. “Tick tock, Mr. Wick.”

Meanwhile, a stern adjudicator (Asia Kate Dillon) dispatched by the High Table — the shadowy organization which governs the underworld — arrives at the Continental. Reprimanding Winston for allowing Wick a head start and dressing down the Bowery King (Laurence Fishburne) for supplying aid, the adjudicator demands both abdicate their positions within 7 days, or face the repercussions, which arrive in the form of a hand-picked assassin (Mark Dacascos) looking to ingratiate himself with upper management.

The marriage of brutal hand-to-hand combat and impossibly precise gunplay have been staples of the franchise, and John Wick: Chapter 3 takes these elements to incredible new heights with some of the most creative, original and flat-out insane action choreography ever seen. Each of these moments are beautifully framed and expertly shot to ensure viewers will have no trouble following the action — a welcome respite from Hollywood’s typical reliance on rapidly cutting between multiple angles of shaky, handheld footage — and to showcase just how much of the stunt work was performed by Reeves himself. Even more impressive are how many of these sequences occur in long, unbroken takes, the logistics of which are truly mind-boggling to consider.

The always delightful supporting cast boasts a few new additions this time around, including Anjelica Huston as a ballet instructor with a link to John’s past; Game of Thrones alum Jerome Flynn as a high-ranking underworld figure with whom Wick seeks an audience; and Halle Berry as Sofia, an assassin-turned-hotelier that owes a great debt to our hero. Berry also figures prominently in the second act’s major setpiece, a breathtaking large-scale firefight in a Moroccan marketplace where Sofia, Wick and a pair of attack dogs are tasked with shooting their way past dozens of armed guards. Berry also deserves kudos as she, like Reeves, appears to be doing the vast majority of her own stunts.

Action fans can rejoice at the inclusion of The Raid 2 stars Yayan Ruhian and Cecep Arif Rahman, who engage in one of the best hand-to-hand fight sequences that John Wick: Chapter 3 has to offer. Taking place in a massive room full of display cases — where the walls, floor and ceiling are made of glass — the fluidity of the combat alone would be a thing of beauty, but the jaw-dropping environment adds a new degree of visual splendor.

Director Chad Stahelski continues the series’ tradition of raising the bar and creating brilliantly imaginative environments in which to stage intricately plotted action, such as a narrow hallway lined with display cases full of antique knives where Wick fends off assailants from all sides. Stahelski also embraces a vibrant color palette, with dark alleyways and rain-soaked streets bathed in neon reds and blues, and leverages the sound design in spectacular fashion. Expect to be assaulted on all sides by the dull thud of punches connecting, the crunch of bones breaking and the sharp crack of each gunshot — in short, John Wick: Chapter 3 sounds every bit as brutal as it looks.

And to be honest, I wouldn’t want it any other way. The John Wick films have a very specific set of strengths (the aforementioned three key elements), and thus far have been able to utilize those strengths to deliver some of the most entertaining shoot-em-ups in recent memory. If Stahelski and Reeves can continue delivering this kind of quality and consistency, then as far as I’m concerned, they can make a dozen of these films and it still wouldn’t be enough.