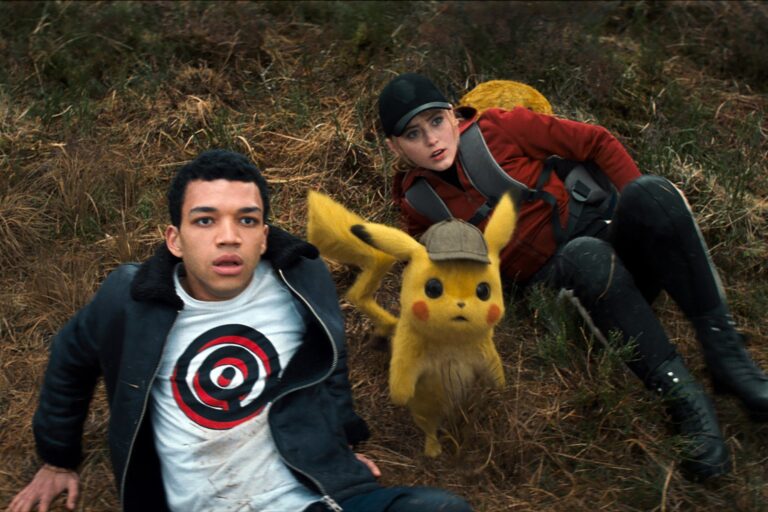 Confession: I’ve never really been a Pokemon fan. Sure, I got caught up in the Pokemon Go craze a few years back, just like pretty much everyone with a mobile device, and the brand’s permeation of pop culture over the past two decades has ensured that I recognize at least a handful of the adorable critters, but that’s about where my familiarity stops.

So it was with some trepidation that I settled in for a screening of Pokemon: Detective Pikachu, the first attempt to combine live-action performances and big-budget filmmaking with the franchise’s massive stable of creatures. Would the film be geared solely at longtime fans, or would a novice such as myself still be able to make sense of it, despite having precious little connection to the source material? Thankfully, the latter proved to be true.

The film opens in dramatic fashion, as an imposing looking creature named MewTwo bursts from its holding tank at a nondescript containment facility, wreaking havoc on its way out and causing an escaping vehicle to go careening over a bridge. The vehicle’s occupant is Harry Goodman, a famed detective from Ryme City, the sprawling metropolis where humans and Pokemon coexist peacefully — “no battles, no trainers, no Pokeballs” — not unlike the predators and prey animals of Zootopia.

Harry’s estranged son Tim (Justice Smith) arrives in Ryme City to clean out his father’s apartment, and is shocked to not only discover that it’s being ransacked by a Pikachu (voiced by Ryan Reynolds), but that he can actually understand and communicate with the furry little guy. It seems this particular Pikachu was Harry’s partner (everyone in Ryme City has a Pokemon companion), and he’s convinced the events surrounding the crash aren’t what they seem. Is there a conspiracy afoot, or is the combination of Pikachu’s post-crash amnesia and affection for caffeine enticing him to go chasing after ghosts?

Clearly cribbing from Who Framed Roger Rabbit? (and not necessarily in a bad way), director Rob Letterman makes ample use of the inherent absurdity of Pokemon existing in the “real world” and interacting with human characters. Each scenario feels more outrageous than the last, as Tim and Pikachu engage in a hilarious interrogation sequence against a magical mute creature called Mr. Mime, infiltrate a seedy underground fight club (Pokemon battles are outlawed in Ryme City), and face off against a rampaging Charizard under the effects of “serum R,” a drug that causes Pokemon to ignore their peaceful nature and attack anything in sight (again, not unlike Zootopia).

Through it all, Detective Pikachu keeps the laughs coming with a nonstop barrage of quips from Reynolds, serving up a PG-rated riff on the same persona that turned Deadpool into a massive success. It’s family-friendly, for the most part, but there are a few cases of double entrende that will sail right over the heads of the little ones, while giving mom and dad an extra chuckle or two. Smith also proves to be an effective audience proxy — he’s not from Ryme City, so the sense of wonder and confusion with which he regards the Pokemon feels congruent with the viewer’s experience — and he wrings some genuine emotion out of several key moments.

Other human characters, like Ryme City’s philanthropic founder (Bill Nighy) and his arrogant, ill-tempered son (Chris Geere) are given practically zero development, which makes their importance to the film’s third act frustrating. Kathryn Newton fares slightly better as an intrepid blogger trying to crack her first big story, but the character would have been better served if the film hadn’t also tried to force an unnecessary romance between her and Tim.

The film’s climax devolves, as so many tentpole-style films often do, into a cacophony of CG action that frequently looks impressive, but ultimately carries very little narrative weight (although Detective Pikachu gets credit for drawing inspiration from a certain moment in Tim Burton’s Batman). Watching various Pokemon deploy their signature powers will surely thrill fans, as will the numerous Easter eggs and references to other franchise elements (which my wife helpfully pointed out), but casual moviegoers may be slightly less impressed with the finale.

Minor grousing aside, Pokemon: Detective Pikachu is still a delightfully entertaining family adventure, with comically over-the-top action, a healthy dose of humor and more adorable creatures than you could ever hope to keep track of. This recipe should translate into wide-ranging appeal and big wins at the box office, and if any film can finally break free of the dreaded “video game curse,” this is the one.