Movie Review: ‘Jumanji: The Next Level’ 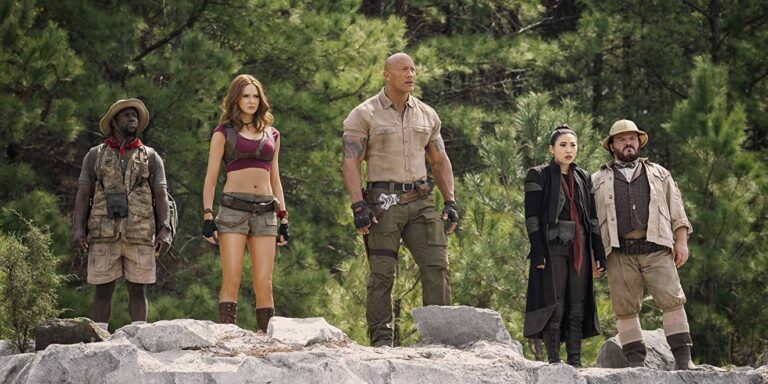 Franchise reboots are something of a risky proposition, with many beloved properties failing to connect with audiences in the same way as their original counterparts (see this year’s Men in Black International for a prime example). But 2017’s Jumanji: Welcome to the Jungle managed to update its predecessor’s formula to great effect with a hilarious family-friendly adventure that resonated with critics (the film has a “Certified Fresh” rating at Rotten Tomatoes) and grossed $962 million worldwide, prompting the studio to quickly greenlight a sequel.

That follow-up arrives in theaters this week, and while Jumanji: The Next Level mostly adheres to the same elements that turned the previous film into such a hit, it also remixes a few of those components to freshen things up a bit. The film opens at the beginning of winter break, with Bethany (Madison Iseman), Martha (Morgan Turner) and Fridge (Ser’Darius Blain) reuniting over brunch. Conspicuous by his absence is Spencer (Alex Wolff), whose first semester at college in New York City has found him growing distant from the rest of the crew.

The group stops by Spencer’s house, where they’re greeted by Grandpa Eddie (Danny De Vito), recovering from hip surgery and in the midst of an argument with his former business partner Milo (Danny Glover). When the kids discover that Spencer has repaired the broken videogame console that pulled them into the world of Jumanji two years ago, they realize Spencer must have gone back into the game — and with his chances of surviving on his own being virtually nonexistent, they elect to go in after him.

The previous film mined plenty of humor from the notion of each character’s in-game avatar being wildly different from their real-world personalities, and Jumanji: The Next Level pushes this idea even further. While Martha once again assumes the role of ass-kicking martial artist Ruby Roundhouse (Karen Gillan), Fridge is dismayed to find himself in the body of Bethany’s avatar, portly cartographer Sheldon Oberon (Jack Black). As for the handsome and muscular Dr. Bravestone (Dwayne Johnson), he’s now being controlled by Grandpa Eddie, and diminutive zoologist Mouse Finbar (Kevin Hart) has taken on the persona of Milo.

Johnson leans into the absurdity of this premise, adopting (or at least attempting to adopt) De Vito’s signature New Jersey accent and cantankerous personality, which he pulls off fairly well in the more ridiculous moments, such as Grandpa Eddie fighting off a horde of bad guys or relishing a rendezvous with a femme fatale. But Hart steals the show with a spot-on impersonation of Glover, right down to his gravelly voice and methodical manner of speaking. The film plays for this for big laughs on multiple occasions, with Milo frequently endangering the group due to his inability to expediently dole out information on deadly wildlife. When Bravestone bites the dust in one early moment, Milo asks in dismay, “Did I just kill Eddie by talking too slow, like he always said I would?”

The overall adventure, which finds the players tasked with crossing deserts and scaling mountains to retrieve a sacred jewel from a vicious warlord (Game of Thrones alum Rory McCann), is mostly forgettable, and the film’s energy starts to wane in the latter half thanks to ho-hum action beats and some laughably bad visual effects. Luckily, a jolt of life arrives in the form of The Farewell‘s Awkwafina as Ming, the cat burglar who serves as Spencer’s new avatar, but she ultimately gets lost in the shuffle of a messy, overblown climax featuring a snowstorm, a zeppelin and pair of nunchucks (seriously).

Director Jake Kasdan does a fine job with the comedy, but his attempts at wringing actual emotion from the onscreen relationships don’t always land (a tearful goodbye between Ming and another character feels especially ridiculous). But no amount of humor can detract from the poorly rendered animals — I can’t help but ponder if anyone on the digital effects team has ever actually seen an ostrich — or the noticeable green-screen environments, of which there are many. After exhausting a laundry list of videogame tropes and cliches, it feels like precious little else can be done with the formula, and while a brief postscript opens the door to yet another follow-up, if Jumanji: The Next Level is any indication of the quality we can expect from future installments, a “game over” screen might be more appropriate.