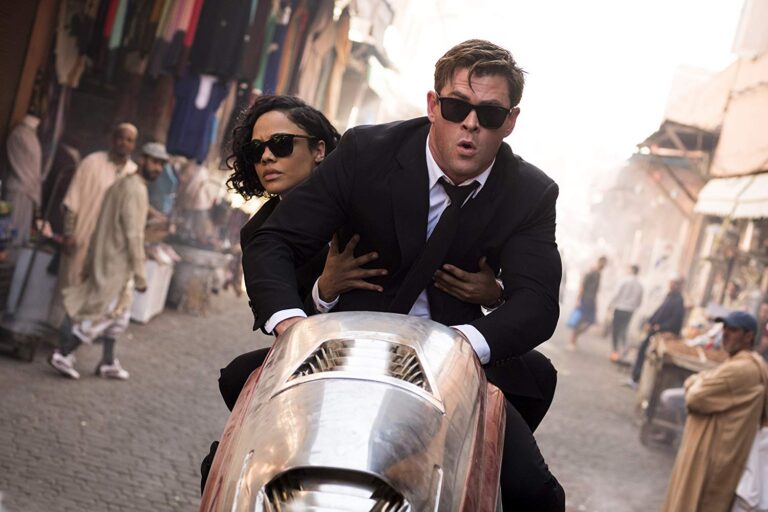 If you had told me the onscreen pairing of Tessa Thompson and Chris Hemsworth, who showcased tremendous comedic chemistry in Thor: Ragnarok, would scarcely elicit a chuckle when teaming up again for Men in Black International, I would have thought it inconceivable. Alas, I would have been very, very wrong, as this sequel — presumably meant to serve as a soft reboot — takes the franchise’s intricate balance of science fiction, humor and secret agent adventuring and trades it for an incoherent plot and an endless series of “jokes” that belong on the cutting room floor rather than on the screen.

Thompson is Molly, a lifelong extraterrestrial enthusiast who witnessed a pair of mysterious gentlemen in black suits erase her parents’ memory of an alien encounter when she was a little girl. Her sole mission has been to determine the origin of the fabled Men in Black, and when she finally tracks them down and begs to join the team, Agent O (Emma Thompson) offers her a job almost immediately. When asked about the department’s moniker, clearly a misnomer for an agency with so many women in leadership roles, the elder Thompson’s commentary is one of the few genuinely funny remarks in the film.

Molly (newly rechristened as Agent M) is sent to London for a probationary assignment, where she finds herself paired with Hemsworth’s notoriously aloof Agent H (Hemsworth) — and yes, the primary characters in the film are called “H&M.” Charming and charismatic as ever, Hemsworth manages to make Men in Black International a semi-watchable affair from time to time, but to shoulder the weight of its messy script and weak wisecracks he would need the might of Thor’s hammer (which gets its own cheeky reference during a third act fight scene).

Elsewhere, Liam Neeson growls and glowers as H’s superior officer, High T (ugh), Rebecca Ferguson stops by to cash a paycheck as an intergalactic arms dealer romantically linked to H, and Kumail Nanjiani actually delivers a few razor sharp barbs as the voice of a tiny alien who pledges loyalty to M, and takes an immediate disliking to her partner. Based on the number of shots where Nanjiani’s character appears on his own, usually in close-up, I’d be willing to bet his role was expanded in post-production based on test audience reactions or studio notes (or both).

Overlong and mostly unfunny, Men in Black International offers precious little of the recipe which made the previous films — particularly the original — so endearing. The vaguely explained plot, involving an alien race known as The Hive and a pair of shapeshifting assassins, is muddled and disjointed, and the action is rarely compelling or engaging. Thompson proves that she’s more than capable of headlining a major franchise, but hopefully she can find another tentpole more deserving of her skillset.