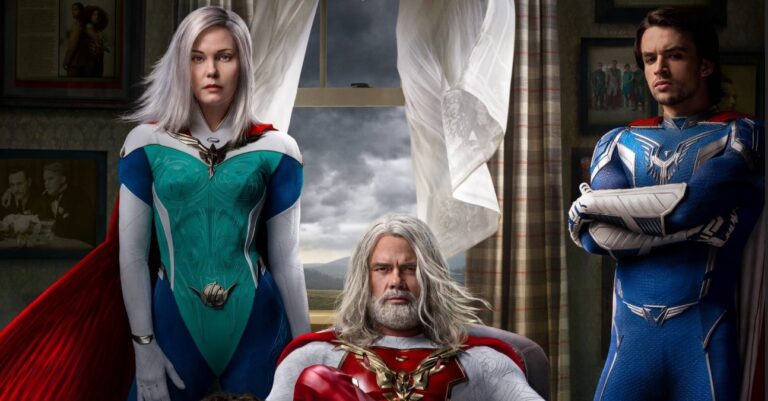 Netflix’s new superhero epic Jupiter’s Legacy is a bold endeavor for all involved. Described by comic book legend and creator Mark Millar as his “Lord of the Rings or Game of Thrones,” the series’ large roster of characters spans multiple time periods from the 1920s to the end of the century. Unfortunately, this ambition drowns the first season in a muddy, cluttered story that loses itself in tonal shifts and ends prematurely, just when it was gaining momentum.

Decades ago, six ordinary people miraculously gained powers beyond anything human beings had ever seen. Their presence ushered in an age of heroes and in present day, these six are nearing the end of their careers with an eager new batch of heroes ready to take up the cause. But modern day life is more complicated than the simpler times of the 1920s, and as the morals of this core group of heroes are tested, their journey in the past is revealed alongside the present via LOST-style flashbacks.

Much of the real drama of the series revolves around the metaphorical battle for eventual Superman homage Sheldon Sampson (Josh Duhamel) aka The Utopian’s soul in the flashbacks between his stern, anchored-to-reality brother Walter (Ben Daniels) and his best friend George (Matt Lanter), who is willing to indulge Sheldon’s growing theories and eccentricities after his father dies. Daniels and Lanter are both superb and manage to reel in some of the finer acting moments that sell the differing pulls of Sheldon’s dilemma, despite the distracting circumstances surrounding them. Duhamel also turns in some of his better work despite spotty aging makeup that differs in quality scene by scene, an issue all the older cast members are burdened with here.

Outside of that main trio, much of the story is populated by unlikable, petulant younger characters involved with the Sampson family, interrupting an already difficult to follow story structure. The quiet, more grounded scenes in the 20s are jarringly different from the modern ones, causing all kinds of tonal issues and rarely feeling connected to each other until very late in the season. Jupiter’s Legacy is so busy trying to establish the differences in the Sampson family throughout the past and the present that the series rarely stops to tell us why we should even care about them at all.

The first episode has a brutal, entertaining fight sequence reminiscent of a better new superhero series, Invincible, but nothing ever really tops it or even lasts long enough for a “wow” factor. While that scene may be visually fun to watch, there are so many characters the audiences doesn’t know or care about that it comes across as hollow carnage. The one actual supervillain, Blackstar (Tyler Mane), is criminally underutilized and the only one seemingly having any fun. The series also boasts uneven and expensive looking CG effects, but the action stays surprisingly low until the strange, effects-driven end conflict.

Jupiter’s Legacy is clearly a love letter to the Silver Age of comics, and attempts to show what would happen to the heroes as they transition to a darker age, but most of that would be lost on the common audience due to the show’s convoluted themes and message. The series fumbles the big ideas and gets tangled in the muck of too many characters and a confusing flashback narrative. By the time the story begins to give answers and seems to pick up the slow pace, everything abruptly ends with the eight episode, with no sense of closure or satisfaction. The predictable cliffhanger leaves you feeling used for eight hours, watching what feels like a prequel to show that you might end up not even wanting to watch.