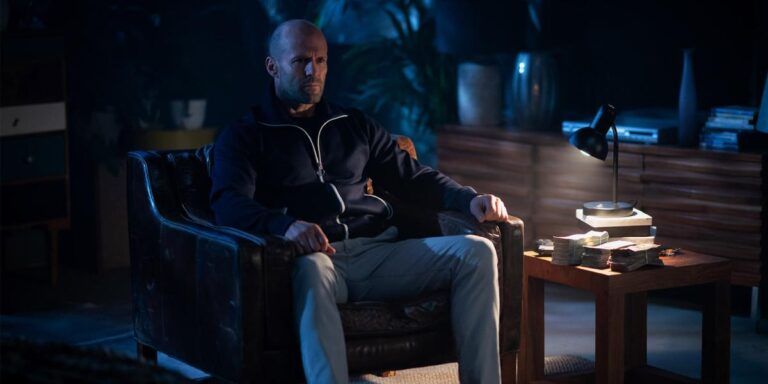 Guy Ritchie’s 1998 crime caper Lock, Stock and Two Smoking Barrels introduced the world to Jason Statham, igniting a professional partnership that would extend to 2000’s Snatch and 2005’s Revolver — not to mention a personal friendship that would endure for more than two decades. Both men have enjoyed illustrious careers, with Statham ascending to action movie royalty and Ritchie tackling massive projects like Sherlock Holmes and Aladdin, but an onscreen reunion was just a matter of time, and it finally arrives this week in revenge thriller Wrath of Man.

Unfortunately, many of the elements that define the duo’s previous onscreen pairings — the snappy dialogue, the dynamic camera work, the humor — are absent from this grim affair, which opens with a mostly static shot from the interior of an armored cash truck as a group of armed assailants help themselves to the millions stashed inside. Something clearly goes wrong, although we don’t see it, but the aftermath leaves both guards and a civilian dead, and the transport company scrambling to rebuild its reputation.

Enter Patrick Hill (Statham), a new recruit christened with the nickname H — “like the bomb, or like Jesus H,” explains his supervisor, known to the rest of the team as Bullet (Holt McCallany). When another heist is attempted during one of H’s first jobs, he breaks protocol by leaving the truck and single-handedly dispatching the entire crew, securing the cash and leaving a trail of bodies in his wake. The owner of the transport company is thrilled at the publicity, but the story of a former security guard who barely passed the handgun exam taking out six heavily armed attackers doesn’t sit well with the FBI agents following up on the incident. Something doesn’t pass the smell test here, but their boss (Andy Garcia) advises them to leave it alone and “let the painter paint.”

Wrath of Man takes the better part of an hour getting around to a revelation the film’s trailer gives away in under two minutes: H’s son was murdered during the original truck heist, and he’s infiltrated the transport company under an assumed identity, waiting for another robbery attempt so he can identify the killers and exact revenge. The non-linear storytelling — jumping forward by three months, backward by five months, forward by three weeks, and so forth — is distracting and confusing, and when we’re officially introduced to the culprits (well past the halfway mark), it’s difficult to make sense of just when the hell anything is happening.

As for those men, they barely register as characters, save for stern leader Jackson (a vastly underutilized Jeffrey Donovan) and budding psychopath Jan (Scott Eastwood), the latter of whom should be the most contemptible person onscreen. But that honor actually belongs to another transport driver, Boy Sweat Dave (Josh Hartnett), a walking cliché who cracks jokes about “menopausal MILFs” and being sick “from all holes” in an especially grating performance. Even our protagonist himself emerges as more loathsome than likable, and Statham’s work here is almost completely devoid of his usual charisma.

Wrath of Man‘s bloody, carnage-laden finale is well-constructed — one of the only segments of the film deserving of that accolade — but the climax alone doesn’t offset two hours of stilted dialogue, grim subject matter and unpleasant personalities. “Boredom is more dangerous than bullets,” says one of Jackson’s crew, and by the time H wrapped up his business I was inclined to believe that notion.