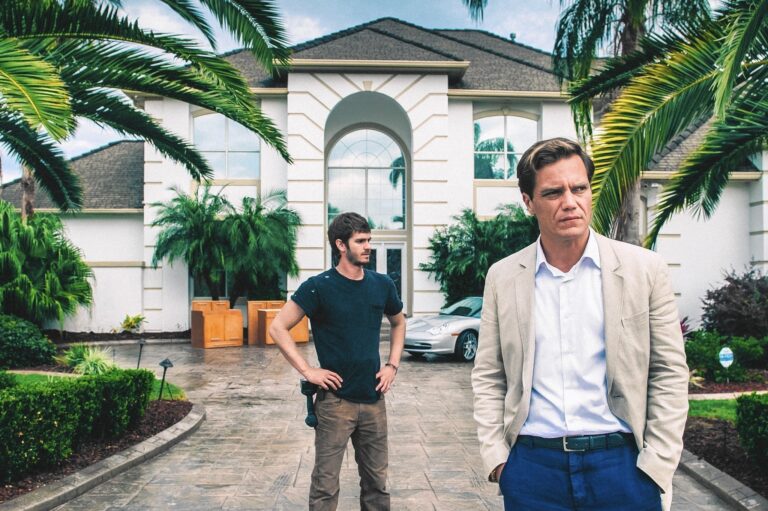 Why is it that sometimes honest, hardworking people end up out on the streets while immoral, deceitful people live comfortably in mansions? There’s really no easy answer except that life isn’t always fair. We’re often taught to do the right thing and be compassionate towards others no matter what. In a dog eat dog world, however, occasionally people have to abandon their ethics to survive. That’s something we rarely see demonstrated in movies. 99 Homes isn’t afraid to go there, though, and pulls no punches in bluntly showing the audience the grim side of human nature.

Andrew Garfield gives one of his best performances as Dennis Nash, a single father who lives with his mother (Laura Dern). Dennis tries to provide for his family through construction work, but nobody ever has any jobs for him. Unable to pay the bills during the 2008 housing market crisis, Dennis’ family is evicted by a greedy real estate agent named Rick Carver (Michael Shannon). He’s a total SOB who has no qualms about ruining people’s lives and then profiting off their misfortune. In an ironic turn of events, Dennis finds himself working for Rick and learning the ways of his business. Dennis eventually becomes Rick’s protégée, making more money than he ever thought possible. In the process, though, Dennis completely loses sight of his morality.

Following Rick, Dennis comes across numerous people that have been hit hard by the economy and took out loans they can never pay back. Although he’s committing the ultimate act of hypocrisy, Dennis plays a hand in kicking all of these people to the curb. Naturally, we feel empathy for the poor individuals who become homeless in the blink of an eye. We also feel empathy for Dennis, who’s simply doing whatever it takes to give his own family the life they deserve. What’s fascinating about 99 Homes, however, is that we even find ourselves identifying with the conniving Rick.

Michael Shannon is a marvelous actor and he brings great depth to a character that could’ve merely been a one-note villain here. There’s little doubt that Rick Carver is the devil and Dennis has sold his soul to him. At the same time, though, Rick is so charismatic and convincing that we can’t help but buy into his cynical philosophies on how the world works. We may not be proud of ourselves, but it’s hard to deny that Rick’s cunning, manipulative ways have made him a success. People may ask Rick how he sleeps with himself at night. If the tables were turned and we found ourselves in Rick’s shoes, though, most of us would be tempted to secure our own success at the expense of others.

Director Ramin Bahrani has made an unsettling picture that won’t make you feel all warm and fuzzy inside. Yet, 99 Homes is truly a provocative film with something daring to say about humanity. It also takes a few turns that you might not expect from a morality tale such as this. Let’s just say that one character’s conscience does eventually get the best of them. That doesn’t mean they’re rewarded for their moral redemption, though, or that they even necessarily made a wise decision. It just goes to show that life isn’t always as crystal clear as we think, especially when we’ve observed things from multiple perspectives.

99 Homes won’t make you feel all warm and fuzzy inside, but it is truly a provocative film with something daring to say about humanity.