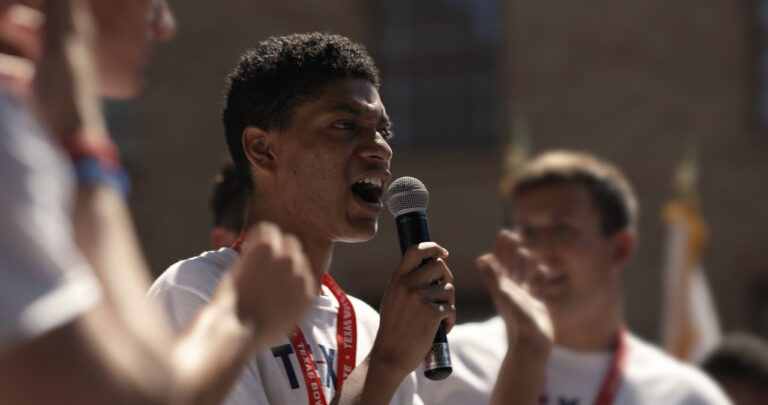 As more than 1100 young men from Texas gathered for a week-long experiment in self-governance — part of an annual program sponsored by the American Legion — documentary filmmakers Jesse Moss and Amanda McBaine rolled camera to capture an inside look at what the future of political discourse might hold. The result, presented in Sundance 2020 hit Boys State, is a fascinating and sometimes frightening microcosm of our current political system, and how anyone looking to affect significant change within that system should prepare for a bumpy ride.

After an introduction which establishes the stakes — the boys are randomly separated into two parties, Federalists and Nationalists, and tasked with developing a party platform and running for office — the doc zeroes in on four personalities: Rene Otero, an African American youth from Chicago with a gift for public speaking, knows that he’s walking into the lion’s den (“I’ve never seen so many white people ever,” he quips at one point); Ben Feinstein, a double-amputee and self-described “politics junkie” with an admiration for the Reagan era; Rob McDougall, a handsome and confident athlete hoping to win votes from the deeply conservative crowd by leveraging hot-button talking points like gun rights and abortion; and Steven Garza, the son of an undocumented immigrant who takes a more earnest approach to politicking, engaging with the students he hopes to represent and learning about the issues that affect them most.

With his warm demeanor, impassioned speeches and a genuine gift for connecting with other people, Steven gradually emerges as the de facto hero of Boys State. But for every hero, there’s a villain, and Ben — with his “shock and awe” approach and “play to win” attitude — quickly proves to be more adept at modern-day politics than any of the other candidates. He uses photos of Steven at a March For Our Lives rally to paint him as a staunch anti-gun advocate (he’s not), leverages social media to paint the opposing party as hopelessly inept and rife with chaos, and publicly blasts Rene for allegedly taking a biased approach to the gubernatorial debate structure. “If I don’t exploit [these issues],” he admits, “there’s a good chance we’ll lose this election.”

Perhaps most disturbing is that Ben shows absolutely no remorse to his cutthroat methodology. He’s keenly aware of the power of perceived bias, particularly among conservative voters, and how Donald Trump used similar tactics to catapult himself to victory in 2016. “A message of unity isn’t winning any elections,” Ben tells the camera. “You have to use personal attacks and divisive issues.” It’s the opposite end of the spectrum from Steven, who vows to support his party platform to the best of his ability, but without compromising his own beliefs and values.

Boys State opens with a quote from George Washington, one that feels especially poignant today: “[Political] parties are likely to become potent engines by which cunning, ambitious, and unprincipled men will be enabled to subvert the power of the people and to usurp for themselves the reins of government.” Indeed, cunning and ambition are in ample supply among these Texas teens — but principles are a bit harder to come by. Many of the boys don’t seem to have fully formed opinions of their own, and are instead regurgitating whatever they’ve been conditioned to believe. Others, like Rob, have a somewhat vague idea of how they feel about certain issues, but might be willing to mask those feelings if they can gain political ground by pretending otherwise.

At its core, Boys State exposes many of the problems with our current political system, including the over-simplification of complex issues that beg to be addressed with a nuanced approach rather than a catchy campaign slogan, and the knee-jerk response to paint everyone from the opposing party with the same brush, even though common ground clearly exists. Young people like Steven and Rene offer a faint glimmer of hope for the future, but it’s the Ben Feinsteins of the world that seem most adept at navigating the murky waters of American politics, and that should scare the shit out of anyone hoping this country can somehow move back toward unity.