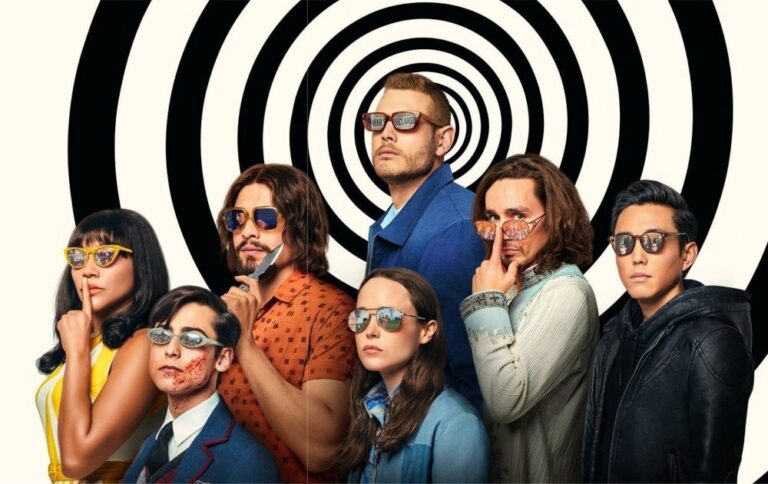 Another day, another apocalypse: the adopted, super-powered siblings of The Hargreeves Family are back and lost in time for the much anticipated Season 2 of The Umbrella Academy on Netflix.

Following the shocking Season 1 cliffhanger, Five’s (Aidan Gallagher) worst fears are imagined after narrowly escaping sister Vanya’s (Ellen Page) world-ending tantrum in 2019 by using his time travel powers. As a result, the siblings each find themselves in different time frames of early 1960s Dallas, Texas and hunted by a mysterious trio of Swedish assassins. Worst of all? Five is the last to land in the past and witnesses a brand new nuclear apocalypse, seemingly caused by their presence during this tumultuous era that includes the assassination of JFK.

The Umbrella Academy‘s return is a welcome, escapist experience that ups the fun factor from the previous season with a dash of poignant societal reflection. The first handful of episodes explode with blinding speed as the new time-bending threat is unwound while the narrative catches up with where (and when) each Hargreeves family member has been within the scattered 1960s setting.

Showrunner Steve Blackman made many wise pivots this season and one of them is Gallagher’s once again terrific performance as Five becoming the defacto lead of the season. The overall tone is also lighter, giving Robert Sheehan’s return as the flamboyant Klaus some hilarious material as he deals with the aftermath of starting a hippie cult. Even Tom Hopper as the big lug Luther gets to play up the strong comedic timing he showed in fleeting moments of Season 1 with a role more beefed up towards the funny.

Not everything this time out is all comic-book silly though, as we find Allison (Emmy Raver-Lampman) with a much more relevant role to play, ditching the mother/daughter drama snoozer from Season 1. After losing the ability to speak (thus losing her powers), her time travel drop off point is right in the middle of the height of the Civil Rights movement, creating some powerful scenes and relationships made even more so by unintentionally reflecting the current struggle and uproar we are seeing play out around us in real time.

While catching up with all the Hargreeves is unexpectedly diverse and fascinating, things start to drag in the middle after the dust settles from the early episodes. Diego (David Castañeda) has quite a few ups and downs with his B-plot involving mysterious new cast member Lila (Ritu Arya), and Vanya’s quiet search for redemption moves at a tedious, predictable pace until both story lines finally come to a head in the final episodes. As with the characters, the show is at its best when the Academy is all together fighting amongst themselves or as a united front.

Despite suffering from the frustrating pacing issues that hurt Season 1, fans of the series are still going to love the incredible action sequences and music selection Season 2 has to offer, with another great soundtrack beaming with lush, cool cover versions of modern songs and some fantastic 60s music. Also, missing from any trailers or marketing material are big twists and HUGE surprises including unexpected returning cast members — some of which play bigger roles than anyone might expect.

As mentioned above, the episodes do come together nicely for a final stretch that rivals the raucous insanity that opens up the season. More importantly, this season’s finale provides solid closure for the seasonal arcs compared to the first, along with another great cliffhanger to boot. With a bit less of the ham-fisted family drama, and a bit more humor and adventure The Umbrella Academy Season 2 is a solid binge and arguably a more satisfying journey than its predecessor.

The Umbrella Academy Season 2 Premieres July 31, 2020 only on Netflix.