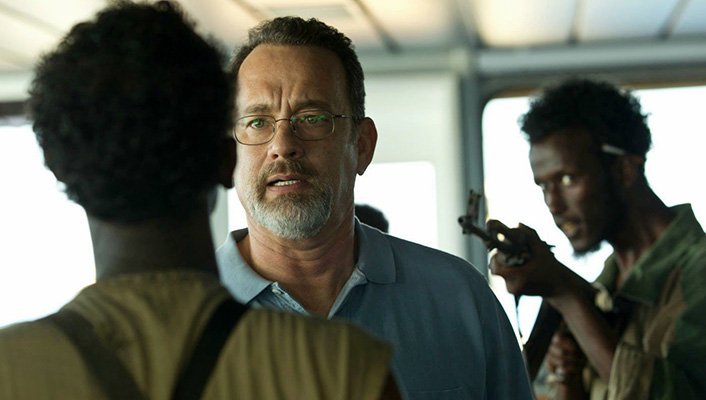 Ah yes, it’s time for Fall. The summer blockbusters have come to a close and the movies gunning for an Oscar are starting to trickle in, and believe me, Captain Phillips will definitely be a contender. The Bourne Ultimatum director Paul Greengrass brings to life a tale of piracy on the high seas, a story seen in headlines yet rarely explored.

The film opens with a nice moment giving just a hint of the fact that Capt. Phillips (Tom Hanks) is a family man. Just when you think they will dwell on this, the film switches gears. Rather than show you one side of the story you are transported to a rickety hut on the beach. The Federal Republic of Somalia has been in a civil war since 1990. Combine that with their local moneymaker, fish, being taken away or killed by toxic waste dumping from big companies and it doesn’t seem like such a stretch that the inhabitants are resorting to taking over ships and holding them for ransom as a living. Warlords caught wind of this lucrative business and started flexing their muscle as well so again, you start to sympathize with Muse, the main pirate followed in the story. It’s a nice symmetry from the start that shows things are not as black and white as they seem. And those warlords are not very forgiving. With that being said, lines become more blurred as the story progresses and some of the sympathy wears thin.

Once the pirates show up as a blip on the radar of the cargo ship Maersk Alabama, the story really grabs you and doesn’t let go until the end. The purposefully jittery camerawork adds to the tension of how chaotic the events that took place most likely were rather than take away as it usually does. The two hours and fourteen minutes fly by at a rapid pace as it transitions from the drama on the main ship, to the drama on the lifeboat which the pirates use as a sort of getaway vehicle. As the situation gets more out of control and into the national spotlight, the Unites States military is called to action. This is also handled nicely, showing the professionalism of the Navy rather than flooding the screen with a slideshow of weapons and gear saying “WE’RE AMERICA! BOOM BABY!”

The real Capt. Richard Phillips said of Tom Hanks “When I met him I told him if he’s going to play me he’s going to have to put on a little weight and get a little better-looking and he did neither.” While he may not have done either according to the good Captain, it can certainly be said that Tom Hanks made up for it in his acting ability. Capt. Phillips also said that you could feel the emotion of some moments in Hanks’ eyes, like he was actually there again. Aside from some lighthearted humor to break the tension in other scenes the theater was dead quiet, everyone glued to what was happening on screen. Captain Phillips hits home in more scenes than not, and when it does, it just may leave you breathless and wondering how on earth the real person made it through such a harrowing ordeal.

Movie Review: ‘News of the World’