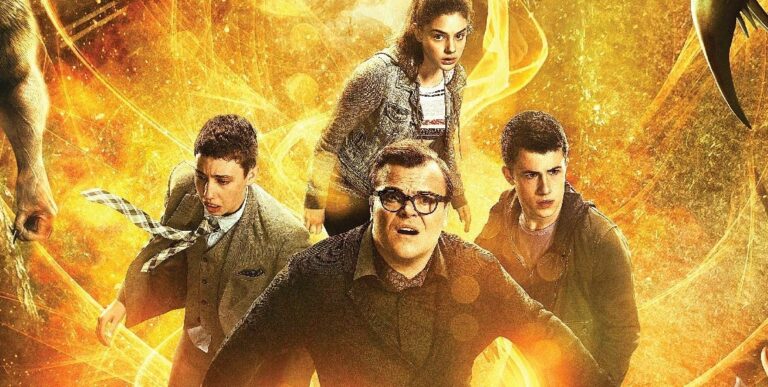 Children of the 90s have strong imagery pop into their mind when they hear the word Goosebumps. Whether it’s werewolves, mummies or the iconic evil ventriloquist dummy, R.L. Stine’s book series were beloved (mostly) by a generation.

The challenge of adapting his franchise into a major motion picture lies in choosing which story is worthy of the big screen treatment. In the case of director Rob Letterman’s Goosebumps movie revival – you don’t choose, you just use ALL of them. This is a creature feature adventure film with elements of Jumanji and Hocus Pocus swirled in for a creepy good time. Younger audiences and families should have a blast with the film, especially during the Halloween season.

Goosebumps turns out to be an unexpectedly clever rebranding of the franchise by going extremely meta with its story and characters. The film introduces Goosebumps author R.L. Stine (Jack Black) as an actual character in the film, living in the world we all live in, where Goosebumps was just a popular kids horror book series.

When Zach (Dylan Minnette) and his mom (Amy Ryan) move in next door to Stine, Zach befriends the over-protective Stine’s daughter Hannah (Odeya Rush). Soon after, Zach misreads a situation over at his neighbors’ house and he and his new buddy/sidekick “Champ” (Ryan Lee) rush over. While trying to help, they stumble upon Stine’s original Goosebumps manuscripts – all of which have their pages locked. Unable to resist the temptation, the boys open one of the books and the true mayhem begins.

Amy Ryan and Dylan Minnette have wonderful chemistry as mother and son, as the film successfully takes its time establishing all of the main cast members before unleashing the eventual monster mash. Jack Black does what he does best by chewing the scenery, but this is exactly the type of film where you want him dialed up to eleven.

Minnette also has a great rapport with sidekick Ryan Lee, creating a duo that reminded me very much of more grown up versions of the two boys from the film Monster House. While the build-up (for the character’s sake) does move a bit slow, the payoff is worth the wait as the expertly paced ghoulish insanity rockets you through the second half of the film.

Almost every monster you can think of from the book series makes an appearance, and it’s all a ton of fun. A lot of films throw around the term “Monster Mash,” but Goosebumps earns the title. One shot in the film has quite possibly the most monsters that I’ve ever seen on-screen at the same time.

Goosebumps also has a really likable, supporting comedic cast including Ken Marino (The State), Jillian Bell (Workaholics), and scene stealing relative newcomer Amanda Lund. While there’s plenty of cheap kid jokes that will get the young ones giggling, there’s just enough unexpectedly witty humor that will go right over the heads of the little ones to satisfy adults. Although one negative aspect of the film is that the adults get really short-changed once the monsters appear and much of the entertaining/funny character moments for their characters go out the window.

Another downside is that the CG effects are noticeably bad, especially with creatures like the Abominable Snowman of Pasadena and the Werewolf of Fever Swamp. Other creatures get better treatment such as Slappy, the evil ventriloquist dummy (Jack Black pulling double duty) who has a solid mix of practical and CG to bring the iconic Goosebumps character to life.

In many ways, what makes Goosebumps work so well is that it takes the nostalgia of the franchise and runs in a fresh direction – much like the approach The Lego Movie took to adapting that property. I would’ve preferred this film go a little darker with its story – there’s a scene involving garden gnomes that reminded me very of Gremlins in that way – but Goosebumps is having too much fun being over-the-top with its freak show and kid-friendly scares to really try being too serious or heavily frightening.

Don’t get me wrong, there’s enough scares to get the kids to jump, but the adults will probably not have any trouble getting to sleep that night. Either way, the better-than-anticipated film brings the right amount of laughs and shrieks to have families thoroughly entertained this Halloween.

Despite its corny kid movie trappings, this creature feature should entertain both child and adult with its surprisingly clever and fun meta take on the beloved book series.