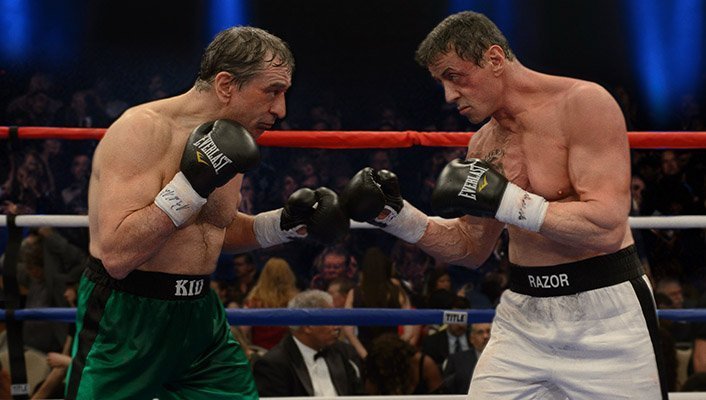 Grudge Match is the story of professional boxers Henry “Razor” Sharp (Stallone) and Billy “The Kid” McDonnen (DeNiro), who decide to have one final match to break a tie in their previous series, thirty years after one of them decides to hang up the gloves. What the audience is treated to, however, is nearly two hours of the same five conversations between Stallone, DeNiro, Kevin Hart, and Alan Arkin, leading up to the fight at the end of the film. Sharp is the “good guy,” McDonnen is the douchey playboy. Insert more clichés here. There are smatterings of side plots that serve to make you not hate either of the main characters going into the final bout, but only result in you not really caring about who wins.

The biggest problem with this film is that it takes two actors who have played possibly the most iconic fictional prize fighters in the history of the human race and forces them to take a giant, runny dump all over the legacy of their films. Much like the fight in the film, nobody’s ever really asked for a fight between Rocky Balboa and Jake LaMotta in thirty years. Sharp trains in a nearly identical way to Rocky, but with a comedic twist that left this writer groaning, and all of the complaints Razor Sharp has about participating in the fight seem to be the actors’ opinions of the film itself.

I would have been much happier with the film if the stars had seemed passionate about the movie they were in, but neither of them seemed to have any interest in being there, and it showed pretty clearly in the final product. I’ve enjoyed Kevin Hart’s standup, but the material he was given to work with by writer Tim Kelleher (The Arsenio Hall Show, Disney’s First Kid) basically boiled down to “racial joke, racial joke, short joke, old people joke” multiple times during Grudge Match. Kim Basinger portrayed the love interest of both Sharp and McDonnen, but her role could have been entirely thrown out without notice.

It’s not, however, a complete waste of celluloid. Jon Bernthal (The Walking Dead) shows up as McDonnen’s son after the first act. While the writers give him little to work with, he does a fine job in his role. MMA fighter Chael Sonnen has a pretty funny cameo midway through the film. The actual bout itself is painfully short, but is as impressive as you could possibly make with two aged actors in very physical roles. While his jokes are completely to the same tune every time, Alan Arkin had moments that caused me to actually laugh out loud.

It’s a shame that the film didn’t end up working. While the premise itself was absurd, the actual results could have been a lot better. When the best part of your film is a surprise cameo after the credits begin, it’s time to go back to the drawing board. It’s now been a full day, and after allowing the contents of Grudge Match to simmer in my critical crock pot, I have to put a message in the internet bottle and hope someone bears witness. My final verdict for you to feast your eyes upon?

Do not give the studio your money. There are tens of thousands of better movies out there for you to spend your meager free time on. Pick almost any of them instead. If you absolutely must see this Grudge Match, do it on a lazy weekend morning on Netflix when it shows up there. Then ask yourself how you got to the point in your life where you absolutely must see a movie like this.

Movie Review: ‘Jumanji: The Next Level’