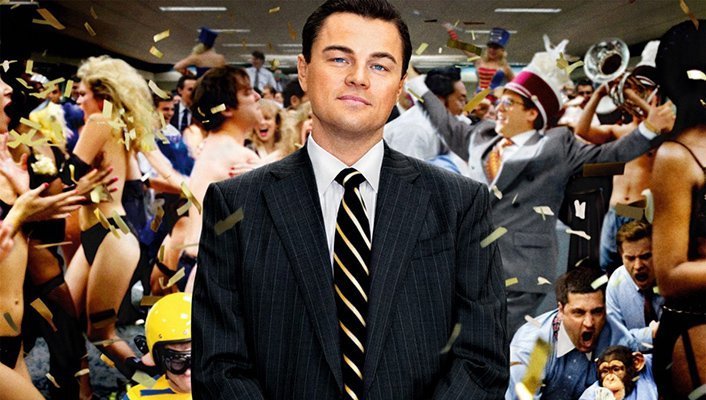 In the mid-1990s, Jordan Belfort (Leonardo DiCaprio) and the rest of his associates from brokerage firm Stratton Oakmont became the very definition of excess and debauchery, their offices a boiler room fueled by cocaine and greed. High pressure sales tactic and less-than-legal behind-the-scenes manipulation bred plenty of twenty-something millionaires, and Belfort built himself an empire at the top of the heap. His rise and fall is chronicled in The Wolf of Wall Street, based on the memoir of the same name.

Under most circumstances, the actions of Belfort and his cronies (including Jonah Hill in a howlingly funny turn as Belfort’s business partner) would be viewed as disgustingly abhorrent, but Martin Scorsese frames this tale of greed with a comedic lens that allows us to laugh at things we probably shouldn’t find humorous. Whether it’s a clumsy attempt at fisticuffs between two characters overdosing on Quaaludes, or the categorization of prostitutes using stock market terminology (“blue chip” hookers make you wear a condom and typically accept credit cards), the film is outrageous from start to finish, and rarely falters in its quest to entertain the audience for three hours.

Belfort manages to delude himself and his pals into thinking they can live like this forever, but the audience knows better, and Belfort’s eventual comeuppance is hardly surprising. But the path is paved with hilarity, especially in a scene aboard the mogul’s luxury yacht, where he surreptitiously offers a pair of FBI agents everything from booze to girls to cold hard cash in exchange for their silence. And let’s not forget his punishment for drunkenly piloting a helicopter into the backyard of his estate at 3am, raising the ire of his trophy wife (Margot Robbie).

Scorsese has always managed to elicit astounding performances from his actors, and his fifth collaboration with Leonardo DiCaprio results in one of the most charismatic, despicable, offensive and captivating characters to ever appear onscreen. As financial bad boy Belfort, DiCaprio swaggers from scene to scene ingesting eye-popping amounts of narcotics, groping and fondling nearly every female within reach, and spouting more profanity in three hours than an entire season of The Sopranos. Belfort is the kind of person that any sane person would detest in real life, but thanks to Scorses and DiCaprio, we can’t take our eyes off him.