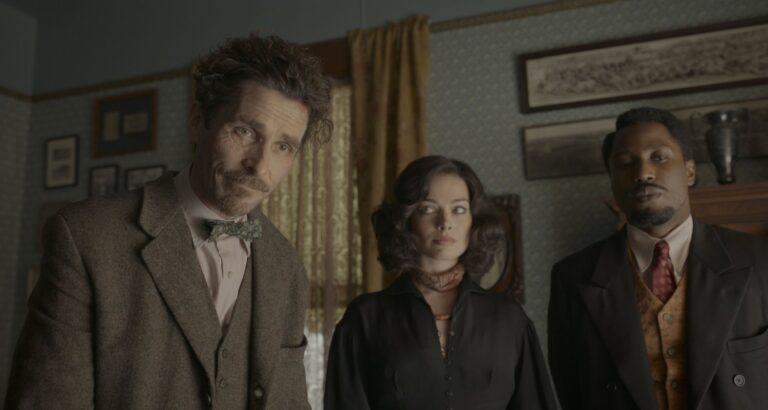 There’s a nugget of truth to Amsterdam — the opening title card promises that “a lot of this really happened” — but none of that truth extends to the film’s three fictional protagonists: Burt Berendsen (Christian Bale), a goofy doctor with a shady medical practice, a glass eye and a soft spot for fellow veterans of the Great War; Harold Woodman (John David Washington), a soldier from Burt’s regiment and the good doctor’s stalwart companion; and Valerie Voze (Margot Robbie), a charmingly unhinged nurse with a flair for turning shrapnel into sculptures. Friendship blossoms when combat injuries sustained on the front lines find Burt and Harold under Valerie’s care, and the trio spend their post-war years living their best lives in the city from which this film derives its name.

Of course, we don’t learn any of this right away; the film actually opens in 1933, with Burt and Harold summoned to conduct on autopsy for their former commanding officer, General Bill Meekins (Ed Begley Jr.), who passed away under suspicious circumstances. It’s only after a horrific fate befalls the general’s daughter (Taylor Swift) — implicating Burt and Harold in the process — that we flashback to the series of events that brought us to this point. The general’s death precedes a sinister plot to overthrow the United States government and install a dictator willing to embrace fascist ideals — this is the part of the story that “really happened” — but the latest offering from writer-director David O. Russell takes its sweet time getting around to it, slogging through layers of contrivance, silliness and self-indulgence for a full hour before finally honing in on the sort of story it wants to tell. It’s an exercise in patience, or perhaps endurance.

A collaboration between Russell and Bale is always certain to result in a fully committed performance from the latter, and Amsterdam is no exception to this rule. Showcasing a knack for physical comedy, Bale all but disappears into the exaggerated mannerisms of his half-Jewish/half-Catholic physician, whose background is a sticking point for the wealthy parents of his estranged wife (Andrea Riseborough). It’s the sort of delightfully unmoored performance that would feel right at home in something directed by Wes Anderson or the Coen brothers. Unfortunately, no one else in Russell’s film seems to be on the same wavelength, least of all Washington, whose humorless stoicism dampens any sense of energy or momentum. Robbie’s early scenes are delightful as she exhibits shades of Harley Quinn’s mischief and mania, but the spark goes out of her performance in the film’s second half, and although we’re meant to believe Valerie’s connection to Harold is more than platonic, I’ve rarely seen an onscreen couple with less chemistry.

Amsterdam certainly isn’t wanting for star power; in addition to its leads, Russell peppers the film with appearances by the likes of Rami Malek, Anya Taylor-Joy, Timothy Olyphant, Michael Shannon, Zoe Saldana, Chris Rock and Mike Myers. The latter two prove to be the biggest distractions, as Rock is basically just channeling his standup persona, a decision which feels at odds with the film’s period setting, and Myers adopts a British accent and an absurd disguise as an intelligence officer who manufactures glass eyes and has a pronounced enthusiasm for ornithology; his performance here is arguably even more painful than his ham-fisted cameo in Bohemian Rhapsody.

If Russell’s intent was to direct a film that runs 134 minutes and feels the length of a TV miniseries, then allow me to be the first to congratulate him on a job well done. However, if his goal was to entertain audiences while also provoking thoughtful discussion about how today’s political landscape shares far too much in common with the rise of fascism in the previous century, he would’ve been well-served by a tighter script that spends far less time meandering through nonsense. Thank goodness for Robert De Niro, who shows up late in the game to portray a stern war hero with little patience for anyone’s bullshit, thus anchoring the narrative and herding the film toward its overblown, unsatisfying conclusion.