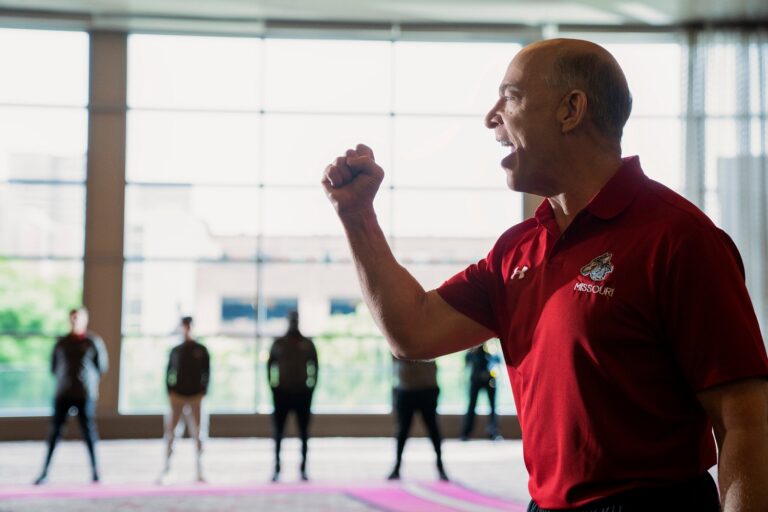 National Champions, from director Ric Roman Waugh, takes a thoughtful, unflinching look at the complex conundrum of morality surrounding high-level collegiate athletes and whether they should be differently compensated. While the fictional story of the film is long-winded and gets bogged down by its own formula, the absolutely stacked cast delivers top-notch performances that keep the story moving with enough grit.

In the media blitz leading up to the college football national championships, future #1 draft pick quarterback LeMarcus James (Stephan James) and teammate Emmett Sunday (Alexander Ludwig) shock the sports world by staging a meticulously planned boycott that sees a growing amount of players from both teams agreeing to sit out of the game by the hour. The young QB’s head coach James Lazor (J.K. Simmons) races to find his star quarterback, who has now gone into hiding, while a horde of boosters and power brokers are breathing down the coach’s neck to fix this or they’ll all lose billions of dollars.

National Champions does a great job at building the chaos surrounding the players’ strike while also keeping both Simmons and James’ characters separated for nearly the entire film. When the two come face to face, it’s an explosive, powerful scene superbly performed by both. The actors both get one too many “speech” scenes overall, but the ones that are used well are the high points of the film.

The subject matter seems a bit dated though, considering that collegiate athletes are now allowed to get compensated for endorsements etc. Many of the arguing points on which the characters proselytize throughout have already been addressed in the real world and since this story is a fictional take, it feels like a moot point. To the film’s credit, it never clearly chooses a side and fairly represents the pros and cons of allowing individual compensation for student athletes.

Taking up the side of the power brokers looking to save the national championship game is Uzo Aduba as Katherine Poe, a cut-throat consultant brought in by the conferences to save the matchup at any cost. Aduba is powerful in the role, showing great compassion for James’ plight, but also willing to burn anyone or anything to get her job done. Few actors can believably put J. K. Simmons in his place in a scene, but Aduba’s Katherine humbles Coach Lazor in their first meeting.

The rest of the terrific cast including Kristin Chenoweth, Tim Blake Nelson, and Timothy Olyphant to name a few, who fill out some soapy B-plots that could have easily been cut to trim the fat that weighs the movie down. Olyphant has the most integral role by the end of the film, but the overall cast all bring gravitas to the story elements that unfortunately felt pulled from a television series that’s padding its running time, instead of for an already overstuffed feature film.

For a college football movie where not a single down of football is played, National Champions works by leaning heavily on its amazing ensemble to carry a fascinating dissection of the current state of billion dollar collegiate sports. The experience plays out more like an Aaron Sorkin joint than We Are Marshall, but the detail and behind the scenes look at the pandemonium of the biggest stage of college football is engrossing and a side that hasn’t been previously covered in major film.