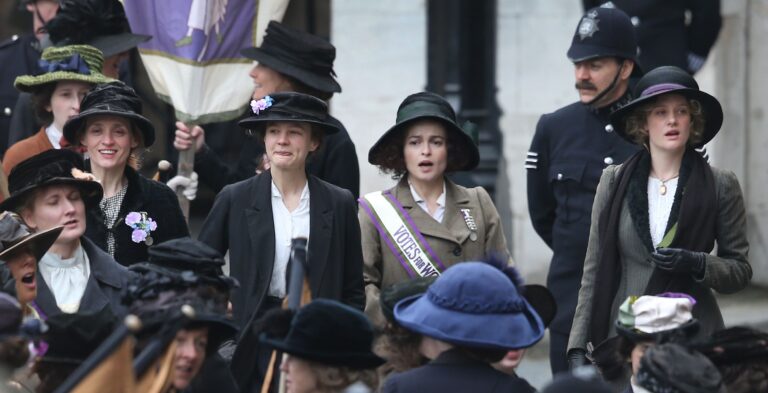 It’s easy to believe in a cause. It’s even easy to support a cause. To actually fight for a cause, however, is easier said than done. We regrettably live in a world where equality is rarely attained without great sacrifice. Being a rebel might sound more glamorous and noble than being a slave. When given the option, though, most people would choose to do nothing rather than stand up to oppression.

Suffragette tells the inspiring story of women who were brave enough to fight for their right to vote. Taking place in the United Kingdom during the late 19th century, the film centers on a woman named Maud Watts (Carey Mulligan), a fictionalized character who was inspired by several foot soldiers during the British women’s suffrage movement. Throughout her life, Maud is told that she’s a daughter, a wife, a mother, and nothing more. Maud accepts this belittlement until voting rights for women start to become a real possibility. She’s compelled to join an underground group of rebels that are willing to break the law to get justice. To gain the rights they deserve, though, these women risk giving up everything.

This is one of Mulligan’s most captivating performances as a woman torn between doing the right thing and surrendering to the system. She has multiple run-ins with an authority figure named Steed (Brendan Gleeson), who tries to silence the rebels at every turn. Thrown in jail and beaten by the police, Maud additionally loses her husband, her son, and her dignity. She’s often tempted to give up the fight, contemplating whether the cause is worth the sacrifice. Mulligan couldn’t be more powerful in creating this empathetic character, making the audience wonder what we would do in her shoes.

Maud is encouraged to continue fighting through the friendships of several key suffragettes. We get some strong supporting work from Helena Bonham Carter as Edith Ellyn and Natalie Press as Emily Davison, two women who were willing to pay the ultimate price for equality. The only performer who’s shortchanged, surprisingly, is Meryl Streep as Emmeline Pankhurst. Given Streep’s caliber as an actress and Pankhurst’s impact on feminism, one would think this role would’ve warranted more than a mere cameo. With that said, Mulligan’s emotional work is more than enough to carry the film.

Suffragette isn’t exactly subtle in getting its message across. Then again, perhaps that’s fitting, seeing how the real suffragettes weren’t subtle in their approach. They knew that in order to open people’s eyes to injustice, sometimes it’s necessary to go to certain extremes. While Suffragette can be obvious, it never feels manipulative. Rather, it reminds us of the important influence these women had on their generation and generations to come. While women would eventually achieve the right to vote in Britain, it’s hard to believe that they’ve only had this right for less than 100 years. What’s even more shocking is that there are still countries that prohibit votes for women. That just gives us more reason to never give up the fight.

Carey Mulligan gives one of her most captivating performances in an inspiring story about women who were brave enough to fight for their right to vote.