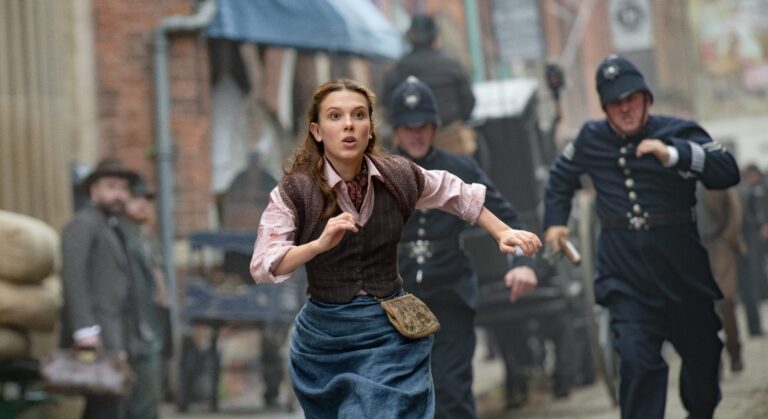 When I reviewed the delightful and charming Enola Holmes just over two years ago, I noted the film’s open-ended resolution had set the stage for a potential franchise, even going so far as express my hope this would come to fruition. Sure enough, Millie Bobby Brown returns to Netflix this week with Enola Holmes 2, charting the further adventures of the teenage detective who just so happens to be the younger sister of the world’s greatest investigative mind, but while the sequel boasts a larger, more complicated mystery, it can’t quite shrug off the same shortcomings that plagued its predecessor.

After the successful resolution of her first case, we catch up with Enola (Brown) to discover that she’s recently opened her own detective agency, but business isn’t exactly booming; most clients, after making the startling discovery of Enola’s age and/or gender, inquire after the availability of her more famous sibling. Enola is about to close up shop for good when she meets Bess (Serrana Su-Ling Bliss), a pint-sized employee at a prosperous local match factory whose older sister Sarah has recently gone missing. When Enola goes undercover at the facility with a bit of assistance from Bess, she pieces together enough evidence to pick up Sarah’s trail, but what begins as a simple missing persons case quickly evolves into a far-reaching conspiracy of corporate greed and political corruption.

Meanwhile, for what might be the first time in his illustrious career, Sherlock (Henry Cavill) is stumped, unable to make sense of his latest case. When Enola turns up on his doorstep to begrudgingly beg for assistance, the detectives discover a potential link between their respective investigations, and each will need to rely on the other in order to untangle the mystery, provided they can remain one step ahead of their adversaries. Luckily, Enola has at least one ally: Viscount Tewkesbury (Louis Partridge), whose prominent political position — and obvious affection for the plucky private eye — will no doubt make for a suitable asset. And of course, there’s Eudoria (Helena Bonham Carter), the estranged matriarch of the Holmes family with a penchant for solving problems with explosive devices.

Much like the original film, Enola Holmes 2 leverages Brown’s chipper narration and persistent fourth-wall breaking to great effect, and its central mystery is once again firmly rooted in the shifting political and social landscape of its time; one of the sequel’s key characters is based on an actual historical figure, and the change she helped inspire is depicted here, although embellished and exaggerated for narrative effect. But also like the previous installment, Jack Thorne’s screenplay is stuffed full of unnecessary exposition and explanation, often dumbing down the proceedings in a manner unbefitting the razor-sharp intellect of its heroine, to say nothing of her older brother.

Speaking of Sherlock, his screen time is greatly expanded here, while Sam Claflin’s antagonistic Mycroft Holmes — a highlight of the first installment — is sadly nowhere to be found. This allows for a further exploration (and evolution) of the relationship between Enola and Sherlock, and the scenes between Brown and Cavill are some of the film’s best. Hopefully Cavill’s recent departure from The Witcher hasn’t soured him on future Netflix projects; he makes for quite the dashing master detective, and Thorne’s screenplay weaves in elements of the larger Sherlock Holmes mythology that could bear plenty of fruit in future chapters, provided they don’t thrust Enola into the shadows while her brother takes the spotlight.

Enola Holmes 2 hews closely to the sequel formula by ensuring that it’s bigger, louder and more complex than the previous episode, but simply checking those boxes doesn’t necessarily make for a better film. Its pacing is more haphazard, action sequences vary drastically in their quality, and both of its villains are undercooked (although to his credit, David Thewlis does some truly excellent scenery chewing). But Brown, innately watchable and full of charisma, remains the glue that holds it all together, and hopefully the third film (which seems all but inevitable) will tighten things up and provide an adventure worthy of its star.