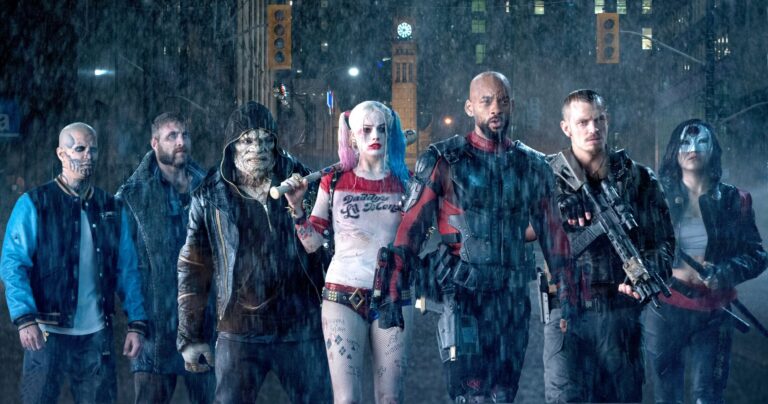 After the critical drubbing levied against Batman v Superman: Dawn of Justice, many fans –- myself included –- hoped Warner Bros. could right the ship with Suicide Squad, especially after a series of brilliantly-edited trailers set to the likes of “Bohemian Rhapdsody” and “Ballroom Blitz” seemed to promise the perfect mixture of action, attitude and –- most importantly –- a sense of fun. And while the film certainly has splashes of those three ingredients, audiences hoping for a massive step in the right direction would do well to temper their expectations, because Suicide Squad falls far short of the assurances made by the Warner Bros. marketing department.

The arrival and subsequent “death” of Superman has thrown into stark relief the very real presence of metahumans, and Amanda Waller (Viola Davis) is smart enough to realize that not every superpowered being will have the best interests of the United States at heart. The only way to combat the inevitable threat of conflict with an enhanced individual is to level the playing field, and Waller wants to take the inmates of Belle Reve Prison and convert them into a black-ops strike force in exchange for shaving time off their sentences.

The only thing more terrible than this idea is the audience’s introduction to these characters, which requires Waller (Viola Davis) to deliver pages upon pages of exposition to her fellow ARGUS agents while we fast-forward through the Cliff’s Notes version of no less than seven origin stories. Two of our villains (or heroes, depending on who you ask) cross paths with Batman (Ben Affleck) during these vignettes, while a third has a brief run-in with another member of the Justice League that will be appreciated by anyone well-versed in DC Comics lore.

After shambling through the first act, Suicide Squad begins to find its footing as the team prepares to embark on their first mission. Under the watchful eye of Rick Flag (Joel Kinnaman), “the best Special Forces soldier alive,” Deadshot (Will Smith) puts on an impressively display of marksmanship, Captain Boomerang (Jai Courtney) tries to punch his way out of trouble, and Harley Quinn (Margot Robbie) pines for her puddin’ – The Joker (Jared Leto), who plans to be reunited with his partner in crime by any means necessary.

Charged with infiltrating the recently-evacuated Midway City and extracting a high-value target from a secure location, while a pair of supernatural siblings turn the remaining population into a seemingly endless army of mindless foot soldiers, the members of Task Force X get plenty of opportunity to showcase their talents in the film’s numerous actions scenes. Deadshot’s lethality with all manner of firearms is matched by Harley’s viciousness as she bludgeons countless foes with her signature baseball bat, and when El Diablo (Jay Hernandez) finally joins the fray, the results are a visual spectacle.

But that’s also one of Suicide Squad‘s biggest weaknesses, particularly in the third act: the film is so focused on creating spectacle that things like character motivations and coherent storytelling –- you know, basic tenets of filmmaking –- are almost completely forgotten. Cara Delevigne’s performance, which wasn’t great to begin with, almost disappears under multiple layers of CG. Blue energy shimmers around her while she chants and undulates and struggles with her character’s laughable dialogue, and the “climactic” battle is a complete and utter snoozefest that features liberal use of fire, explosions, and slow motion, none of which gel together in any meaningful fashion.

Thank God for the cast of this film, however, because they’re firing on all cylinders, and their complete and utter commitment to the material is the best thing Suicide Squad has going for it. Walking into the theater, I would have been willing to bet money that Margot Robbie would be the standout, but it’s actually Will Smith’s portrayal of Deadshot that turned out to be the core of the film. A world-class hitman with a chip on his shoulder who wants to make his ten-year-old daughter proud by doing something noble? That’s good stuff, and Smith does an excellent job balancing the tender moments with Deadshot’s brash and arrogant persona.

While she may have been mildly upstaged by the Fresh Prince, Robbie is still on point here, infusing Harley with just the right amount of mischief, malaise and macabre. Her origins are gradually explored via flashbacks, allowing us to see the talented young psychiatrist seduced by the Clown Prince of Crime, creating an unconventional love story that also drives the film’s B-plot –- which probably could’ve been given a bit more screen time, if for no other reason than to spend a few more minutes with Leto’s bizarre interpretation of The Joker. We’ve never seen a version of Harley’s main squeeze quite like this: he’s deranged, provocative and extravagant, and Leto is so creepy and unsettling in the role that I still can’t decide how I feel about it.

But as terrifying as The Joker might be, he pales in comparison to the mirthless, tough-as-nails puppet master Amanda Waller, whose ruthless tactics and utter disregard for anything but her own agenda paint her as a bigger criminal than the inmates under her control. Davis is absolutely incredible here, turning even the most pedestrian dialogue into something riveting the audience wouldn’t dare look away from, and her brief exchange with a prominent member of the existing DC universe hopefully foretells of her return in the not-too-distant future.

Suicide Squad has a lot of problems, including a messy script, a bloated character roster and a constantly-shifting tone. But when the pieces line up long enough for the film to establish something of an identity, it can be a tremendous amount of fun, and I enjoyed my initial viewing quite a bit more than my first experience with Batman v Superman. It’s a shame that the overall experience doesn’t come anywhere close to capturing the excitement of the trailers –- and the fact that two of my favorite shots from the marketing don’t actually exist in the film will probably bother me for weeks -– but it’s definitely not the worst comic book film of the year (that distinction belongs to X-Men Apocalypse), and as disappointing as Suicide Squad may have been, it still does enough things right to make it worth a look.