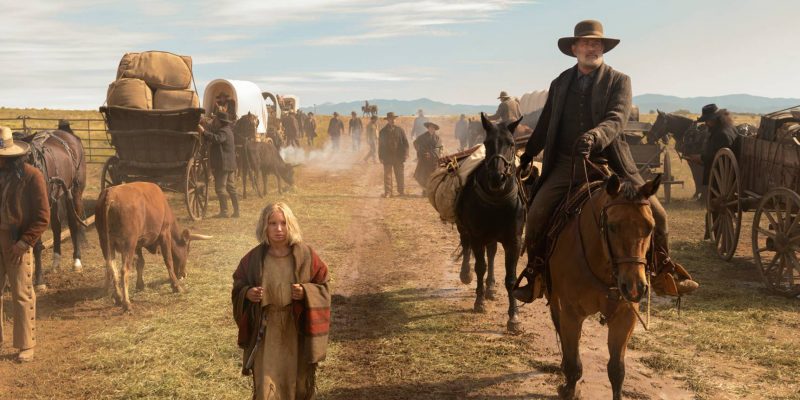 That Tom Hanks, over the course of a career spanning four decades, has somehow never appeared in a Western feels almost like an oversight. Regrettably, his long overdue foray into the genre, Universal’s adaptation of Paulette Jiles’ novel News of the World, feels like an opportunity squandered. Reuniting with Captain Phillips director Paul Greengrass, Hanks anchors a predictable, paint-by-numbers narrative with an equally predictable performance that he likely could’ve given in his sleep.

Not long after the end of the Civil War, Captain Jefferson Kyle Kidd (Hanks) travels throughout Texas, performing live readings from a variety of newspapers for townsfolk with neither the time or (in some cases) the education to read for themselves. Charging ten cents a head, the paltry earnings are enough to keep the Captain on the road, but his journey is disrupted when he stumbles upon an overturned wagon, a lynched driver (bearing a sign that says “this is a white man’s country”) and a wild-eyed child with blonde hair, dressed in deerskins and speaking a language Kidd recognizes as Kiowa.

Taken during a raid that killed her parents several years prior, Johanna (newcomer Helena Zengel) was raised by the Kiowa before her adopted family perished in a confrontation with white soldiers. Kidd presents her to the soldiers occupying the nearby town of Red River, but when his pleas for assistance are met with disinterest, he takes it upon himself to reunite Johanna with her only remaining blood relatives, an aunt and uncle residing in the town of Castroville some 400 miles away. The journey promises to take them over treacherous terrain and through lawless territory, where armed secessionists patrol the roads and a megalomaniacal businessman (Thomas Francis Murphy) holds a small town in the grip of fear.

News of the World has all the trappings you would expect from a Western, including horse chases, run-down saloons, shootouts with would-be bandits, and numerous shots of stunning vistas and wide-open prairies populated by herds of bison. Indeed, Greengrass has made a great-looking film, outside of some shoddy digital effects — a dust storm in the third act is particularly awful — and the score by James Newton Howard complements the visuals quite well. Unfortunately, the other crucial elements don’t fare as well.

The formulaic narrative all but ensures seasoned viewers will piece together the story beats well in advance, which would be fine if the journey was especially engaging — regrettably, that’s not the case. While the ever-reliable Hanks turns in a fine performance, he remains firmly in his comfort zone here, and although Zengel impresses in her first US film role, News of the World brings virtually nothing new to the genre (other than Hanks himself). If you’re in the market for a sprawling Western saga about a grizzled veteran taking a wayward child under his wing and embarking on a hazardous trek to reunite the child with others of its kind, forming an unlikely parental bond in the process, Disney’s streaming hit The Mandalorian does a much better job of scratching that itch.