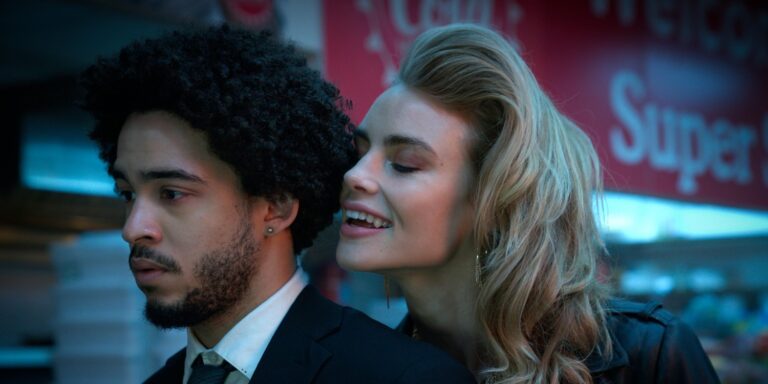 Adam Randall’s Night Teeth, premiering this week on Netflix, offers a sleek and stylish riff on vampire mythology, treading familiar ground but giving the mostly by-the-numbers narrative a glossy coat of paint courtesy of the neon-soaked Los Angeles nightlife. Randall’s film posits a modern-day LA in which humans and vampires have enjoyed a shaky truce for generations, thanks largely in part to the citizens of the historic Boyle Heights neighborhood who fought back against the bloodsuckers during their initial uprising.

More than a century removed from that initial conflict, an enterprising shot caller named Victor (Game of Thrones alum Alfie Allen) breaks the truce, setting up a conflict with Boyle Heights peacekeeper Jay (Raul Castillo), whose younger brother — college student and aspiring musician Benny (Jorge Lendeborg Jr.) — steps in to cover Jay’s gig as a limo driver for the Beverly Hills elite. His clients for the evening are Zoe (Lucy Fry) and Blaire (Debby Ryan), and they have a list of parties they need to hit before sundown. “Non-negotiable,” warns Zoe, and Benny is so distracted by the beauty of his two passengers that he hardly notices anything strange about their behavior, until he wanders into the the second venue of the evening and finds both women feasting on the necks of two musclebound bros.

It should come as little surprise that Zoe and Blaire’s itinerary for the evening is directly related to the bad blood (no pun intended… or is there?) between Victor and Jay, but seasoned viewers will almost certainly connect the dots long before Night Teeth gets around to it. Despite being positioned as the villain pulling all the strings from the shadows, Allen is given surprisingly little screen time; his meatiest scene occurs not with anyone from the principal cast, but with Megan Fox and Sydney Sweeney in glorified cameo appearances as other members of the vampire elite. Lendeborg Jr. is charming and affable as the hero of the story, and Ryan elicits plenty of laughs with her bemused and playful treatment of her chauffeur for the evening, but Fry’s progressively deranged performance is easily the most entertaining and Night Teeth roars to life whenever Zoe decides to unleash a bit of chaos.

The film stumbles a bit with its attempts at John Wick-esque world-building, although there are some fun ideas at play, like the city being divided into five territories with each controller by a different boss. “Like the mob?” asks Benny. “Please, we’re not amateurs,” Blaire scoffs in reply. There’s also a crossbow-toting group of vigilantes called the Night Legion that pop up for some visually arresting firefights, and the series of nightclubs and dive bars in which much of that action is staged provide some eye-popping scenery. But the details of the vampire world are too vague to leave a lasting impression, and Night Teeth finds more success in its well-polished visuals than its underdeveloped storytelling, making for a perfectly watchable (if not particularly memorable) Halloween streaming selection.